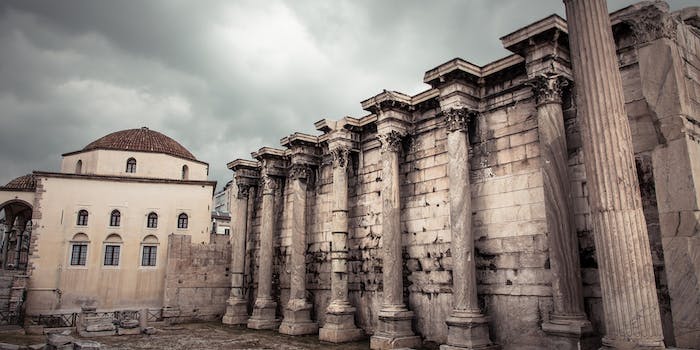 The case for reparations in Greece

The country is in ruins, and it's time for Germany to help them rebuild.

Last month, the “Digital Economy and Society Index” determined that Greece ranked close-to-last among European Union nations in keeping up with the progress of the digital revolution. This is hardly surprising, considering how far behind that nation lags in so many other metrics, but it is telling here for one reason: If the Greek public was better connected online, there is a chance they could stimulate more support for their movement to receive long-overdue World War II reparations.

Indeed, the ongoing dispute between Greece and Germany demonstrates that, in more ways than one, World War II is still relevant today. At the center of the controversy: Greek Deputy Finance Minister Dimitris Mardas is claiming that Germany owes his country nearly €279 billion (about $303 billion) for the devastation caused by the Nazi occupation of Greece 70 years ago. No one disputes that the Third Reich was guilty of war crimes, or forcing taxpayers to subsidize a major loan their government couldn’t afford, and severely damaging the nation’s infrastructure.

This isn’t even the first recent occasion in which Greece has tried to receive compensation: Just last month they threatened to seize German property in their country if they weren’t paid.

In response to Mardas’ statement, however, German Economic Minister Sigmar Gabriel declared that the figure produced by the administration of Prime Minister Alexis Tsipras—the first official calculation ever tabulated by the Greek government—was “dumb.” His reasoning contained two parts, namely, that Germany had already compensated Greece in 1960 (even though at that time they pressured the weaker nation into accepting only a fraction of what they were claiming for the damage caused) and that Germany’s reunification in 1990 voided any debts pending from prior German governments.

Twitter has already been abuzz with commentary on the international disagreement:

Shouldn't onus be on EU/Germany & failure to renegotiate debt in fair, humane ways?Greece Should Be Wary of Putin http://t.co/nw8NIhnRZj

YouTube also hasn’t been quiet on the subject, with some videos taking a semi-humorous approach to the topic.

However, most focus, with due solemnity, on the horrors of Germany’s atrocities in that country, such as its murder of 60,000 Greek Jews:

The Internet community has identified an important dimension to this issue: While the $303 billion demand by Greece is too high (it would comprise nearly one-third of Germany’s entire GDP), this doesn’t mean that they shouldn’t try to pay Greece in some way. For one thing, the economically collapsing nation genuinely needs all the help it can get, lending a humanitarian dimension to what would otherwise be an ethical and historical case for German reparations.

Right now, Greece has the highest unemployment rate in the European Union, its anemic banks are loading up on short-term debt to stave off bankruptcy caused by the harsh austerity measures imposed on them after the 2008 economic crash, and there are even rumors that the country will need to turn to shady financial offers from Vladimir Putin’s Russia if no other options are made available to them. Needless to say, these financial and economic woes have had a considerable humanitarian cost as well, with Greece ranking dead last on the social justice scandal among all EU nations.

The economically collapsing nation genuinely needs all the help it can get.

Ironically, Germany is in a unique position to sympathize with Greece’s predicament. After all, one of the major factors that led to the rise of the Nazis was the economic catastrophe caused by the harsh war reparations demanded of that nation after World War I. Although their effect was not precisely analogous to that of the austerity measures being internationally imposed on Greece, both created widespread unemployment and poverty, and both were rigidly imposed by a callous international community. (Germany didn’t finish repaying its World War I debt until 2010.) As the growing popularity of Greek neo-fascist political parties like Golden Dawn demonstrates, the same ingredients that produced Adolf Hitler more than 80 years ago are present in Greece today.

Even if Germany chooses to ignore the parallels between Greece’s current ordeal and its own historical experience, however, that doesn’t give them the right to avoid any moral accountability for the suffering their past actions inflicted on the Greek people.

For a relevant analogy on this side of the globe, one might look at Ta-Nehisi Coates’ case for reparations for African-Americans victimized by systematic racism, which appeared in the Atlantic last June. Although it acknowledged that “the lives of black Americans are better than they were half a century ago,” it also pointed out that the lingering income gap between blacks and whites at all socioeconomic brackets is the direct result of racist policies in housing and neighborhood planning, hiring, and access to opportunities for economic uplift out of impoverished inner cities. The net result was that, in America, “the concentration of poverty has been paired with a concentration of melanin. The resulting conflagration has been devastating.”

The same ingredients that produced Adolf Hitler more than 80 years ago are present in Greece today.

A similar point can be made when looking at the effect of the Nazi occupation of Greece on the Greek people today. The Greek Civil War took place between competing powers that rushed to fill the void caused by the Axis conquest of their nation. Ever since, power has shifted dramatically back and forth, with the nation’s political life practically defined by its instability; for a few years in the late 1960s and early 1970s, they were even ruled by a military junta. Germany may not have directly caused Greece’s current economic catastrophe, but the decades of political instability that allowed it to happen occurred because of Adolf Hitler.

When we think about history, our primary guideposts are numbers: years, months, days, etc. While this is certainly useful in terms of remembering important historical events, we need to remember that human existence can’t be neatly tucked away into chronological boxes. Just because the Axis powers left Greece seventy years ago doesn’t mean that the damage caused in the 1940s isn’t responsible for the problems of the 2010s. Indeed, there are genocides throughout the world that are still playing a direct role in current politics: Look at the Holocaust in the Arab-Israeli conflict, the numerous ethnic conflicts in the Balkans, the aftershock following the Rwandan genocides, and so on.

The bottom line is that, morally speaking, Germany should be expected to compensate Greece for what it did during World War II. While the exorbitant figure demanded will need to be trimmed down considerably, its egregiousness shouldn’t obscure the fact that Greece was never fairly compensated for Germany’s past actions, even though a demonstrable link can be made between the chaos of that distant era and Greek experiences today.

The fact that Greeks aren’t as able to present their own case online doesn’t mean the Internet should allow their cause to fade away. This lesson is important not only for Greece and Germany but wherever social justice issues linger throughout the world.

Matthew Rozsa is a Ph.D. student in history at Lehigh University as well as a political columnist. His editorials have been published in the Daily Dot, Salon, The Good Men Project, Mic, MSNBC, and various college newspapers and blogs. I actively encourage people to reach out to me at [email protected].

Photo via jaumescar/Flickr (CC BY 2.0)