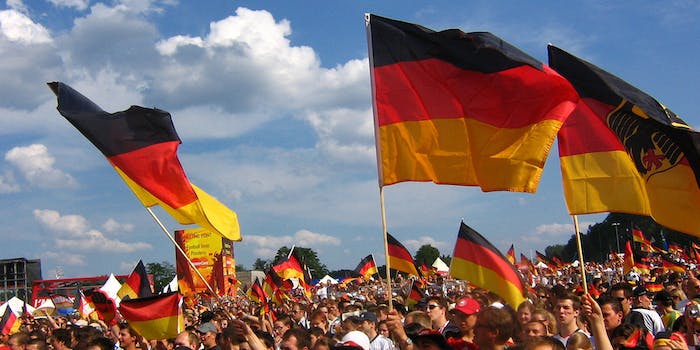 It took 90 seconds of extra time for Germany’s Andre Schuerrle to lift his country into to the quarterfinals.

Algeria pushed Germany to a 0-0 draw through 90 minutes Monday night in Porto Allegre. But it took 90 seconds of extra time for Germany’s Andre Schuerrle to lift his country into to the quarterfinals with a breathtaking, blink-and-you-missed-it back heel goal.

Mesut Özil struck in the 119th minute to seal the win and book a date with France in Rio De Janeiro Saturday. Abdelmoumene Djabou responded for Algeria two minutes later—tying a record for last World Cup goal ever scored—but the consolation strike only served to engrave a fitting 2-1 score into this game’s epic, no-prisoners theatrics. Eventually, the clock struck midnight on the frisky Desert Foxes.

The imperialistic nature of Germany’s global dominance isn’t happenstance. Germany is now 31-3-7 all-time against non-European competition at the World Cup—although that budgets in a loss to Algeria in 1982.

Thirty-one minutes into the offensive, Algeria was awarded a free kick just outside the penalty area. It sailed well over German keeper Manuel Neur. You kind of realized then that Algeria lacked the finishing touch to pull this off.

Still, Neur would have to make 18 runs out of the box during regulation, frenetically morphing into a sweeper at one point.

Thomas Muller had scored nine goals through his first nine World Cup games, a Pele-level pace. He threw every trick at Algeria keeper Raïs M’Bohli, from diving headers across airborne fullbacks to mid-air, change-of-direction tucks that just couldn’t tap in. M’Bohli was a rock, deflecting goal-scoring balls from Muller in the 34th, 79th and 81st minutes.

In the 86th minute, a desperate Germany gave us comical clown car follies from a botched, schoolyard trick set piece.

It eventually found the last laugh.