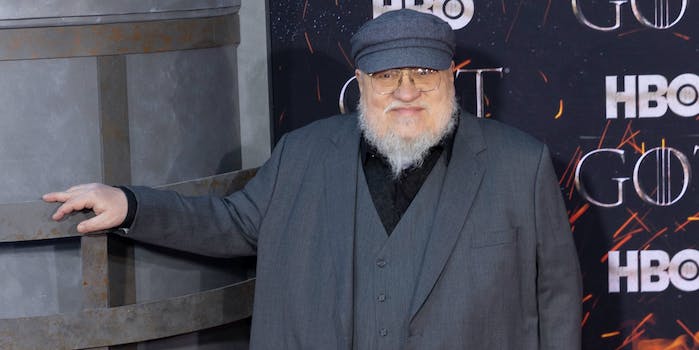 George R.R. Martin has been productive in quarantine

'I am spending long hours every day on THE WINDS OF WINTER, and making steady progress.'

It’s hard for many of us to stay focused several months in quarantine, but as George R.R. Martin reveals in a new blog post, he’s been very productive with writing The Winds of Winter.

Martin has always kept himself busy; aside from writing, he’s producing the Game of Thrones prequel series House of the Dragon, has several other projects and adaptations in production, and still owns a bookstore and theater that are still closed. (He’s even got some time to read.) But the COVID-19 pandemic canceling nearly every major gathering or moving them online, such as WorldCon, which he’s still hosting in a virtual capacity. He’s in the midst of recording segments for the convention, but Martin also has more time on his hands to write.

“In between tapings, I return to Westeros,” he wrote. “Of late I have been visiting with Cersei, Asha, Tyrion, Ser Barristan, and Areo Hotah. I will be dropping back into Braavos next week. I have bad days, which get me down, and good days, which lift me up, but all in all I am pleased with the way things are doing.”

The last novel in his A Song of Ice and Fire series, A Dance With Dragons, was published in 2011, and over the years, Martin has foregone writing Game of Thrones episodes and attending many of the conventions he’s been invited to in order to work on The Winds of Winter. He’s avoided announcing any kind of concrete deadline or publication because of the likelihood of missing that deadline. In a blog post last year, he even joked that “if I don’t have THE WINDS OF WINTER in hand when I arrive in New Zealand for worldcon, you have here my formal written permission to imprison me in a small cabin on White Island, overlooking that lake of sulfuric acid, until I’m done.”

WorldCon isn’t happening in New Zealand, so he won’t be able to deliver his book to people in-person. Nor does he have any idea when it will be finished, though he hopes he’ll be done by the time he visits New Zealand next year; he wishes he could still write around 150 manuscript pages in a month as he did with A Storm of Swords. But when the wait has been nearly nine years and counting, any news is good news.

“If nothing else, the enforced isolation has helped me write,” he wrote. “I am spending long hours every day on THE WINDS OF WINTER, and making steady progress. I finished a new chapter yesterday, another one three days ago, another one the previous week. But no, this does not mean that the book will be finished tomorrow or published next week. It’s going to be a huge book, and I still have a long way to go.”