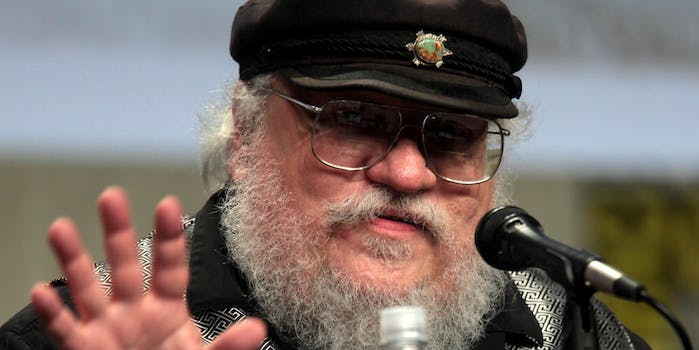 The man behind Game of Thrones is changing the way we think about authors in the digital age.

George R.R. Martin isn’t your typical celebrity. Mid-sixties, bearded, and a huge fan of suspenders and newsboy caps, he personifies the stereotypical image of a fantasy/science fiction nerd or geek. And yet Martin’s place in American culture demonstrates exactly how unfair those stereotypes are.

The idea of the celebrity author isn’t new, though it has changed somewhat with the advent of the Internet. Right now, there’s a conversation going on regarding whether “real” writers should stay offline entirely. On one end, you have someone like John Green, who’s known for his efforts on the Web as much as for his books by now. Then there are those few literary heavyweights who’ve gotten surprisingly good at Twitter, like Margaret Atwood and Neil Gaiman.

And let’s not forget the presence of pop sensations such as E.L. James and J.K. Rowling (not that anyone is comparing Christian Grey to Harry Potter). Even the notoriously technophobic Stephen King is online now, though he’s put his foot in his mouth a few times. But on the other end, you have the likes of Joyce Carol Oates and Bret Easton Ellis, who seem to be on Twitter purely to troll people at this point.

But Martin is something different altogether. Though certainly not a product of the Internet (he’s been writing since the ’70s), Martin’s digital brand shows just how powerful the connection between fans and creators is in this Web-centric era.

Martin does all the usual stuff that celebrity authors do nowadays on the Internet. He has over 200,000 followers on Twitter and over 300,000 likes on Facebook. In addition to his official website, he has a LiveJournal blog titled Not A Blog (rest assured, it pretty much is). In 2012, he did a standard Reddit AMA to promote Game of Thrones on HBO, as well as a plethora of interviews in recent years to accompany the show’s rising popularity.

But his place on the Internet and in popular culture amounts to much more than all that. Martin’s tradition of killing off his characters has made him something of a meme. It’s not hard to find t-shirts or bumper stickers that read, “Guns don’t kill people. George R.R. Martin kills people.” Last year, South Park satirized the frequent nudity in Game of Thrones, as well as the long waiting periods between his books. Saturday Night Live also poked some fun at this earlier in the year.

Additionally, Martin himself has become instrumental in promoting the TV version of Game of Thrones. This week, Seth Meyers did a hilarious bit on his show (with the help of Amy Poehler) wherein the two comedians quizzed the author on lines from his books. This appearance was preceded by several stops at Conan, one of which included the classic segment that found Martin reacting to fans reacting to “The Red Wedding.” Martin even did a brief cameo on John Oliver’s Last Week Tonight, popping in only long enough to tell the host he’d just finished killing “three of your favorite characters.”

He’s also played an active part in the Game of Thrones panels at San Diego Comic-Con and elsewhere. And let’s not forget amusing distractions like his ice bucket challenge participation from earlier this summer.

It seems safe to say that Game of Thrones would be popular whether or not Martin took part in its promotion. But the fact that Martin is such an active presence behind the camera (he’s written three episodes so far, though he plans to take a break next season) and in front of it gives new layers to the notion of adapting a book or a series of books. Stephen King, easily one of the most famous and adapted authors in America, was so jealous of Martin’s role in HBO’s version of Thrones that he decided to pen an episode of CBS’ Under the Dome (a show based on one of his books) in its second season.

Of course, Martin already had experience in television, having formerly contributed to the rebooted versions of The Twilight Zone and The Outer Limits, as well the trippy Beauty and the Beast series from the ’80s. However, his position not only as a writer and producer but the very face of Game of Thrones puts him in a place that differs from those of his contemporaries.

Not that all this attention has been entirely easy on Martin. For one thing, he’s sick of being asked the same questions over and over again by journalists. Which character is his favorite? For the last time, it’s Tyrion. And he has some mixed feelings about his recent burst of fame. In August, the Guardian interviewed Martin in Edinburgh, where the fantasy world’s other superstar, J.K. Rowling, currently lives. When asked about parallels between the two of them, he said:

I wouldn’t use the word shock. But, yes, it does seem unreal at moments. I’m constantly forgetting that my life has been transformed. I think Rowling was a different case because they were her first books. For me, I’d had 20 years of fantasy and science fiction books that had done well, but not like this. And there’s part of me that makes the unconscious assumption that I’m still that person and can live that kind of life. And then I’m reminded that I can’t because Game of Thrones has become such a phenomenon and I’ve become a celebrity. There are nice things about it and not so nice…loss of privacy and the fact that it’s out of your control…it’s great to have all these readers and fans who, for the most part, are very nice people, saying they love the books and the TV show. But there are so many of them and it just doesn’t end.

Martin’s relationship with his fans is notoriously tricky. As the Guardian’s Mark Lawson notes, “The apparent feeling among Martin’s fan base that he should lock himself away until the narrative is completed reflects the extraordinary success of the franchise.” Most of the time, Martin seems not to let the pressure of that success get to him. However, when a Swedish journalist asked how he reacted to speculation about whether he’d finish the Game of Thrones books before his death, Martin responded, “Fuck you to those people.” Lawson ends his interview describing Martin as giving off a “slightly steely sweetness,” just as Martin tells his fans, “It will be done when it’s done.”

In 2011, right before the Game of Thrones premiered on HBO, the New Yorker did a piece on Martin, which observed that “some of Martin’s fans have grown exceedingly restless.” The magazine’s Laura Miller continued, “The same blogging culture that allows a fantasy writer like Neil Gaiman to foster a sense of intimacy with his readers can also expose an author to relentless scrutiny when they become discontented.”

Miller goes on to talk about how many of these readers turned into trolls, creating whole websites to talk about being fed up with the pace of Martin’s writing. “An entire community of apostates—a shadow fandom—is now devoted to taunting Martin, his associates, and readers who insist that he has been hard at work on the series and has the right to take as much time as he needs,” she writes. “Even Gaiman got dragged into the feud when he responded, on his own blog, to an inquiry about Martin’s tardiness by issuing this reproof: ‘George R.R. Martin is not your bitch.’”

“The online attacks on Martin suggest that some readers have a new idea about what an author owes them,” concludes Miller. “They see themselves as customers, not devotees, and they expect prompt, consistent service.” Without a doubt, Martin is not the only one to run into this newer, darker side of fandom. The debate over ownership of the Star Wars franchise, and whether it belongs more to creator George Lucas or to the series’ fans, exemplifies this.

Except that by all accounts, Martin cares intensely and deeply about pleasing his fans, perhaps in a way that someone like Lucas never did. Before the HBO show premiered, Martin used to regularly attend meetings of his fan club, the Brotherhood Without Banners, in his home state of New Mexico. He’s even fannish himself: in the New Yorker profile, he actually calls out fellow genre show Lost for stringing fans along and not giving them the ending that they deserve (an accusation Lost creator Damon Lindelof promptly responded to).

Moreover, Martin seems to astutely understand the capabilities of fan interaction in the digital age. The New Yorker also mentions a Swedish fan named Elio M. García, Jr., who, in addition to managing Martin’s social media accounts, runs the A Song of Ice and Fire (this is the name for the collective Game of Thrones saga) web forum, Westeros.org. In fact, Martin has increasingly relied on García in recent years for particulars that have slipped his mind over the 20-plus years he’s been working on the series. He’s even involved García in the production of the show, referring questions about various details to him, and letting him consult on Game of Thrones merchandise and video games.

And on top of all that, they just published a book together, The World of Ice & Fire: The Untold History of Westeros and the Game of Thrones. In terms of a creative partnership, Martin’s and García’s is an unlikely albeit best case scenario in terms of demonstrating the Internet’s potential to make fans a part of what they love.

As Martin’s wife, Parris McBride (whom he met at a sci-fi/fantasy convention), told the New Yorker, “George and I are fans first.” This kind of sums up Martin’s important place in our culture right now. Despite the battle about what it means to be a “real” geek, it’s fair to say that geek cultue has gone mainstream. Look at this note Martin responded to, from a fan asking if he’d ever been into role-playing games (he was), and consider that hipsters are playing Dungeons & Dragons now. The fact that Martin can be a hugely successful author, a major celebrity, and an unabashed nerd at the same time is nothing short of inspiring.