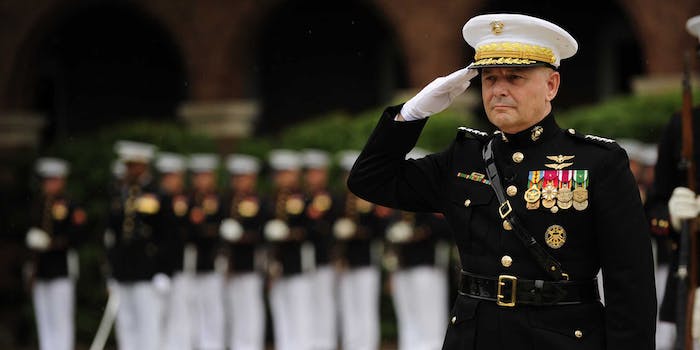 High-ranking general suspected of leaking cyberattack to the press

Did the military's second-highest ranked officer tell the New York Times all about U.S. cyberattacks against Iran?

What does lowly Pvt. Bradley Manning have in common with the military’s former second-highest ranking officer? They both may have leaked military secrets.

Retired Marine Gen. James “Hoss” Cartwright, the former vice chairman of the Joint Chiefs of Staff, is under investigation by the Justice Department for leaking classified information about the U.S. government’s string of cyber attacks against Iran’s nuclear program, according to NBC News.

Cartwright, who served as vice chair from 2007 to 2011, is suspected of leaking information to the New York Times last year about the Stuxnet program. Under the Bush, and later Obama, administrations, Cartwright oversaw the top secret program that was responsible for infecting computer networks in Iranian nuclear laboratories. Stuxnet was designed to sabotage the centrifuges used for enriching uranium— a critical step in the process of manufacturing a nuclear weapon.

When the program was first reported last year, the president vowed a criminal investigation, despite the fact that Stuxnet was greeted with mostly popular approval.

The original Times exposé did not identify Cartwright as the source of its information, though it detailed how Cartwright conceived of and ran the program, originally codenamed “Olympic Games.” The cyberattacks were unleashed in 2010, sabotaging more than 1,000 centrifuges.

NBC reports that the initial investigation into the leak focused on White House officials, with Republican critics charging that the leak was politically motivated to bolster the President’s national security credentials during last year’s election. From there, investigators began taking a closer look at Cartwright:

“But, said legal sources, while the probe that Attorney General Eric Holder ordered initially focused on whether the information came from inside the White House, by late last year FBI agents were zeroing in on Cartwright, who had served as one of the president’s ‘inner circle’ of national security advisors. Two sources said prosecutors were able to identify Cartwright as a suspected leaker without resorting to a secret subpoena of the phone records of New York Times reporters.”

This is hardly the first time the Obama administration has cracked down on national security leaks, having already initiated the prosecution of eight individual for espionage since taking office. But this is the highest ranking military official implicated in unauthorized disclosure of military secrets. No formal charges have been filed against Cartwright, but many are already casting doubt about whether he’ll face the same kind of stiff scrutiny that has met less distinguished leakers.

Glenn Greenwald, the Guardian columnist who first broke the National Security Administration’s top secret PRISM program questioned whether or not Cartwright would be treated the same as Manning, who leaked thousands of classified documents to WikiLeaks.

Will this be Bradley Manning’s cellmate? http://t.co/UHaWfAkEtb

Will Stuxnet leaker get same demonization #Snowden getting (Stuxnet was not unconstitutional, btw)?

Photo by U.S. Department of Defense/Flickr