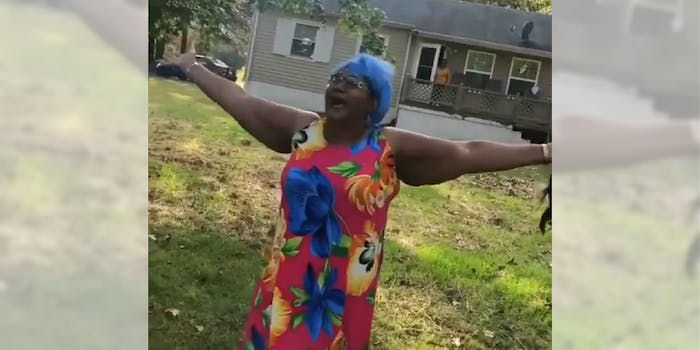 On Monday morning, a Twitter user shared a video with the caption, “best gender reveal I’ve seen.” The clip shows an expecting mother popping a balloon, seemingly expecting blue or pink confetti to burst out. The video takes a turn when a woman (presumably her mother) removes her black wig to reveal blue hair underneath, signaling that the baby will be a boy.

The unexpected twist has earned nearly 100,000 retweets and lots of humorous replies within a few hours.

While some called the stunt “ghetto,” because, you know, the participants are Black, others shot down that racist stereotype to say that the gender reveal is simply creative.

Many respondents even said that they might use a colorful wig for their own gender reveals.

The “it’s clear” had me pic.twitter.com/5eum9MmDax

This gender reveal is one of many that have made waves on the internet recently, including one unfortunate case that resulted in a huge wildfire. Perhaps this viral video will spark a trend in future gender reveals—as well as wig purchases.