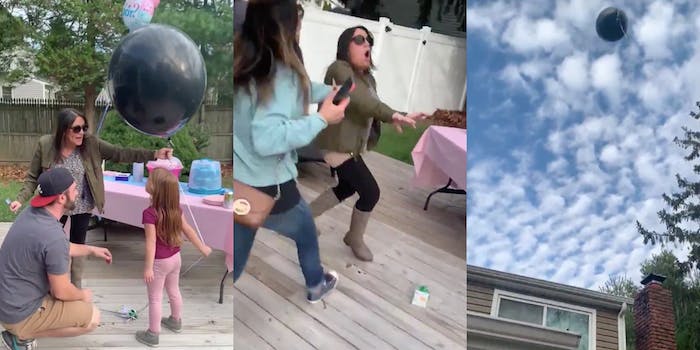 At least there were no wildfires, right?

A viral Reddit video shows yet another gender reveal going hilariously wrong when an expectant mother lets go of the balloon to scold her daughter.

The video was uploaded by Instagram user @dlicht_ (whose account is private) and later reposted by Barstool Sports’ Podfathers Podcast. It was also uploaded to the r/PublicFreakout subreddit, where it has earned more than 4,000 upvotes. The video shows the expectant couple and their daughter standing before a crowd of excited onlookers. They’re all cheering for the daughter to pop the giant balloon and reveal whether it contains the color blue or pink.

The couple’s daughter, however, wants none of it. She protests and tries to run away from the giant balloon, seemingly afraid to pop it. When her mother takes the balloon-popping knife out of her hand, her daughter lets out an ear-piercing scream. The mother then hands the knife back to the daughter, who throws it across the deck.

Incensed at this deviation from the gender reveal script, the mother turns to her daughter, swats at her hand, and says, “Are you kidding me?” But as she turns to scold her daughter in a rage-fueled haze, she fails to account for the balloon, which now has no hands on it and consequently floats into the sky. The video ends with the crowd giving a sitcom-style gasp and watching in horror as the balloon flies above the trees and out of sight.

Redditors were unflinching in their mockery of the video, criticizing the mother for slapping her child and condemning gender reveal parties as a whole.

“Theres got to be correlation between trashy families and gender reveal parties,” u/Jasper632 commented.

“The Venn diagram is one circle,” u/CactusPete75 responded.

“The balloon is that circle. Which then pops to reveal the correlation,” u/Oizaf888 replied, bringing the discussion full circle.

Hey, it could be worse. At least this couple’s gender reveal fail didn’t result in wildfires or $8 million in damages.