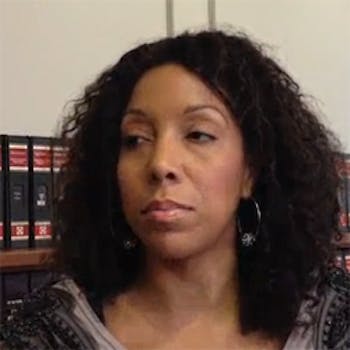 In a YouTube video, Sophia Ellison says an employee of Best Buy's Geek Squad offered to wipe her old phone clean, and made a CD of her personal photos instead.

A rogue Geek Squad agent from a Best Buy in Fairfax, Va., is accused of stealing a woman’s racy photos from her broken iPhone she’d brought in for repair, promising to return them only if she personally retrieved them at his home.

Sophia Ellison told radio station WTOP that when she shattered her old iPhone screen, she took the phone to Best Buy and met a Geek Squad agent identified only as “George.” She wanted her personal files, including photos, taken off her old phone and transferred to her new one.

In an 11-minute interview posted to YouTube, Ellison explained how she brought her old, shattered-screen iPhone into Best Buy, to see if her photos and other files could be transferred off the old phone onto her new one. After she admitted to George that she did not have backup copies of the photos, he allegedly offered to buy her old phone for $60 – paid from his own wallet, not Best Buy store funds – promising to “wipe it clean.”

Ellison says she accepted, but her photos were not transferred to her new phone as promised. A few days later, she says, George called her at home “to tell me that he had made a CD, at his house, with all my photos; when can I come get them? And then that’s when I literally felt sick. I hung up the phone and felt exposed and realized, oh my gosh. All my personal – I felt violated. I felt so embarrassed. …. I just felt he knew too much about me. The only thing he didn’t know was where I lived.”

A Best Buy spokeswoman told WTOP, “First and foremost, we apologize to this customer for an unfortunate experience caused by what appears to be rogue action against our code of conduct, specifically related to our trade-in program. We hope to restore her trust. We can confirm that an employee at this store has been terminated for making a personal transaction with a customer while on duty at the store.”

But Ellison was not mollified, and few online commenters weren’t either. On Twitter, John Nelson, posting as @neodagringo, exclaimed: “This dude is a POS! #BestBuy needs to do more than just fire him. I completely empathize with this poor lady.”

Another Twitterer linked to the story and added, “No wonder @BestBuy is going out of business.”

Kevin French wryly suggested, “In an effort to improve customer service, @GeekSquad employees will now punch customers in the face upon store entry.”

However, since this is the Internet, there was a predictable amount of victim-blaming as well: “Idiot customer gives phone with nude pics to bestbuy geek squad, geek squad keeps the naked pics … Who would…”  @recompiler tweeted.

So far neither Ellison nor her lawyer have filed charges with the police, and “George” has not been identified.