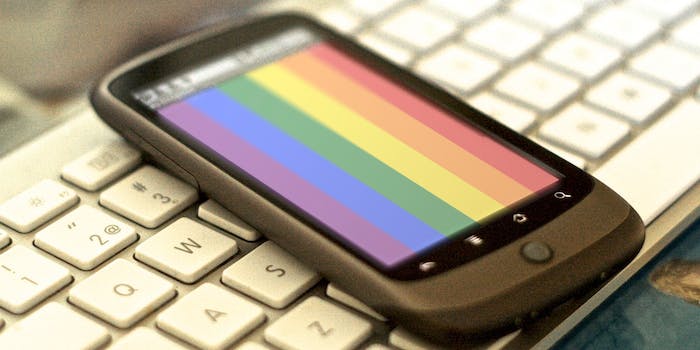 It's time for gays to stop playing sex police.

Oh, the hours—the afternoons! The days! The weekends I have spent looking for and having sex. And oh, the incomparable joy it’s brought me!

But you’re not really that shocked, are you? Of course, you’re not. After all, gay men have always had a bit of a reputation when it comes to sex. And why not? Unbridled by the restraints of “traditional” relationships and (until very recently) solely straight institutions like marriage and the nuclear family, we’ve long enjoyed the pursuit of sexual relations whenever, wherever, however, and with whomever we could get our sweaty gay mitts on.

Even in the face of AIDS, which has ravaged our community and caused so many gay men—myself included—to tragically equate sex with death, we didn’t stop looking for opportunities to get off, we just found ways to do it more safely.

No, pleasure has never been a dirty word for us, though many of our straight counterparts (who are, let’s admit, equally interested in the same wondrous carnal arts but, thanks to our society’s sturdy puritan mores, remain unable or forbidden to indulge in them or at the very least admit they secretly do indulge in them) may wish it otherwise.

And in some ways, I’m actually fine with that. As much as I want straights to join us in ushering in a brave new age of sexual liberation, I understand that change takes time and that thanks to a whole bunch of heady terms (think: religion, sexism, patriarchy), it’s not as easy for them to partake in sex the way that gay men historically have.

But you know what I can’t understand, and furthermore, won’t stand for? Other gays playing sex police—and it’s starting to happen more and more.

A New York Times article entitled “Chelsea’s Risque Businesses” from earlier this year, which highlights a number of gay parents living in what is perhaps one of the most famously gay neighborhoods in the world and who are now lamenting the fact that their children have to grow up just feet away from sex shops. The backlash on Twitter was swift.

“Chelsea’s Risqué Businesses” aka when did everyone in #NYC become sexphobic & boring? http://t.co/1eF37PqdYd

I clocked this in an essay I wrote back in 1998. “Respectability Gays” at it again. | Chelsea’s Risqué Businesses http://t.co/JNRU85tbdq

Some in the article worry about the storefronts’ mannequins with their “bulging crotches,” condoms strewn across the neighborhood’s sidewalks and the daunting task of having to explain ads for a lubricant called “Boy Butter” to their kids.

You know what I can’t understand, and furthermore, won’t stand for? Other gays playing sex police—and it’s starting to happen more and more.

But here’s a radical idea: How about instead of demonizing sex and the people who are looking for it and having it, we demonize our society that labels the sight of a bulging crotch (plastic or otherwise) as indecent and embarrassing and threatening? And, if you’ll permit me just one more humble suggestion, how about we tell our kids exactly what Boy Butter is and why it exists and stop acting like it’s something to be ashamed of? (I’ll save my full rant about sex education for another time.)

Now that we can get married and queer people having children is becoming more and more accepted, it seems we’ve forgotten that sexual liberation has always been, in my mind at least, a cornerstone of queer liberation. And it seems some queers think we’ve just been having all of this sex and pushing back against all of these sexual boundaries for all of these years as just another way to pass the time until we could become just like straight people. Like, “Hmm. We can’t get married yet. What should we do in the meantime? Needlepoint? Nah. Competitive baking? No. Oh, I’ve got it! Let’s get off!”

As if the New York Times article isn’t bad enough, earlier this week, in an op-ed for Elite Daily, Thomas Caramanno felt compelled to rail against “certain gay men who objectify other men and change sex partners as frequently as their 2(x)ist underwear” and who are giving a bad name to the gay men who “are currently in, or are actively pursuing, romantic relationships, [and] revere notions of monogamy and family.“

Caramanno is disturbed by “the male gaze” and the way that he has been groped in gay clubs and “eyed by guys the way a hungry CrossFitter stares down a packet of bacon” (which, if you ask me, sounds pretty hot) but most shocking to him is that he’s “been told by some men that this behavior is normal, acceptable, and even desirable” (oh boy, he’s just going to love this piece, isn’t he?).

“Hmm. We can’t get married yet. What should we do in the meantime? Needlepoint? Nah. Competitive baking? No. Oh, I’ve got it! Let’s get off!”

Ultimately, he wants us to “strive to attach a different kind of value to sex, one that does not use it as the sole basis of our collective identify and mode of communication,” which, when you peel away the hyperbole (because, as much as I love sex, it’s obviously not the sole basis of my identity or mode of communication), is essentially exactly what so many of our straight counterparts want from us.

And he’s not alone. I can’t count the number of times that I’ve heard other queers saying things like: “Isn’t it time we grow up and stop wearing jock straps on Pride floats?” or “How are we supposed to demand equal rights if we can’t stop being so promiscuous?” And all of that kind of thinking is, aside from reeking of sexphobia and internalized homophobia, just plain gross.

I believe sex is a gift that allows us to connect with others (and ourselves) for a night, for a lifetime, or just for 25 minutes during our lunch break. I believe sex and pleasure are nothing short of magical and transformative. I believe queer people have been appointed by some higher power to help change the way that our society thinks about sex. And I refuse to believe that just because queer people are increasingly being folded into the mainstream, we should give up fighting for all of the things we’ve been fighting for all these years.

The goal has never been to get the same rights as non-queer people so we could be just like non-queer people—even though some, like Caramanno, might argue otherwise. We’re supposed to be leading by example and showing that sex is not scary, sex is not dirty, sex doesn’t need to be with just one partner, and in a healthy, happy society, sex should be an important and inspiring way of connecting with one another.

If I had it my way, we’d have sex shops in every neighborhood—right next to the local McDonald’s—and we’d talk about sex in every school and we wouldn’t give films with sexual content NC-17 ratings while slapping PG-13 ratings on mind-numbingly violent films.

But for those of you who are already headed to the comments section below to tell me you love sex, you just think it’s something that should be kept private, that’s fine. I don’t need to see you on XTube being bent over your Ikea coffee table (though I’ll watch if you want to send me a link). But there’s a difference between privacy and a refusal to accept, understand, and discuss sex as the natural, beautiful (and, yes, ridiculously hot and thrilling and sometimes raunchy) event it should be.

I believe sex is a gift that allows us to connect with others (and ourselves) for a night, for a lifetime, or just for 25 minutes during our lunch break.

Can you be queer and want a monogamous relationship and two kids and a chocolate labradoodle curled up at the end of your bed where you have sex once a week in the missionary position after the 10:30pm rerun of Seinfeld has aired? Of course you can. And I’m still fighting for your right to be able to do that. Sexual liberation comes in all kinds of shapes and sizes and flavors and we should all be able to do whatever we want (as long as everyone involved is consenting and no one is being hurt—unless they are asking to be).

But the second you start telling me that I’m a bad guy—and what’s more, a bad gay—if I don’t “revere notions of the family and monogamy,” we’ve got a big problem.

So, let’s make a deal: I won’t ask you to have more sex with more people or have sex the same way that I have sex or wear a jockstrap in public or visit a sex shop or try Boy Butter. But you have to stop telling me and everyone else that it’s unsavory to want sex simply for sex’s sake or how it is or isn’t OK to find it or how often it’s OK to want it and with whom and where. When you do that, you’re buying into the same broken nightmare we’ve been fighting against for years.

Instead, let’s welcome the stunning progress that we’ve recently made with open arms and unzipped pants. We can get married, we can have children, we can be upstanding members of society, and we can still happily and proudly get our brains fucked out as hard and as often as we want by as many people as we want without being blamed for ruining everything for everyone.

Photo via Johan Larsson/Flickr (CC BY 2.0) | Remix by Max Fleishman