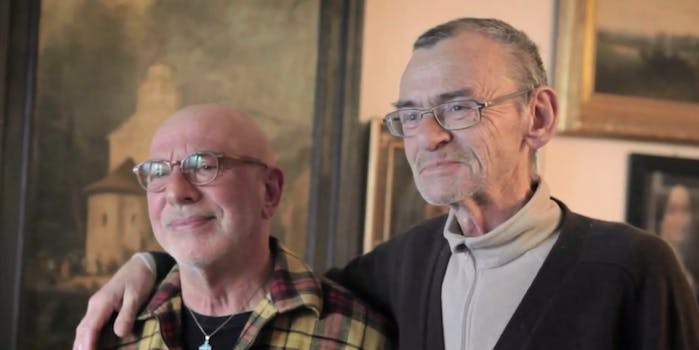 Weeks before France began allowing marriages of gay couples, several got married without even having to leave the country.

Weeks before France began allowing marriages of gay couples, several got married without even having to leave the country.

Or, at least, they tied the knot symbolically—using Google Hangouts.

Nonprofit Tous Unis Pour L’Egalité (which means “All States for Equality”) hooked up three couples with a Belgian mayor through the Google+ videochat tool. The mayor married the couples with their families and friends in attendance both in person and in the Hangout itself.

The result of the endeavors? This heartwarming video.

It’s purely a symbolic gesture, but it drew attention to the issue in France before same-sex marriage was made legal. It’s a contentious topic in the country: A crowd of tens of thousands marched in Paris to protest the law this weekend. Last week, a man shot himself dead in Notre Dame Cathedral, also apparently in protest.

If those services are as anything as beautiful as these, here’s hoping there are many more ahead.