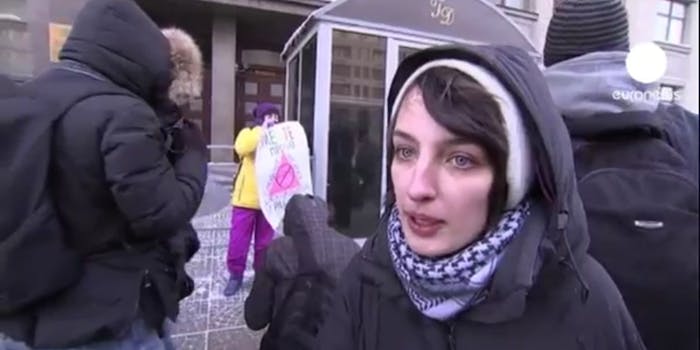 On Sept. 5, Elena Kostyuchenko, an investigative journalist with the Russian newspaper Novaya Gazeta, made an announcement on her Twitter account. In response to a new bill that aims to remove children from the households of same-sex and LGBT couples, she promised to out any closeted politicians who vote for it.

This bill comes after the passage of a law banning homosexual “propaganda” in Russia. The bill’s proponent, State Duma Deputy Alexei Zhuravlev, explained that “if one of the child’s parents indulges in sexual contact with persons of the same sex, the damage to the child’s psyche is immense as a mother or father serves as an example for their offspring,” thus making homosexuality tantamount to child abuse.

Kostyuchenko’s campaign aims to distribute info about closeted State Duma members, if the bill passes after first reading. A translation of another report from the website Gay Russia explains she used Twitter to gather info, including correspondence and photos. In January, she attended a “kissing protest” in front of Russian parliament, where several gay men and women were attacked.

This outing campaign might seem extreme, but the mounting crusade against LGBT youth, and the Russian government’s use of “pedophile fighters” to target them through social media, has caused outrage beyond Russia. Kostyuchenko, who was arrested in May during a pride rally along with her partner, added, “This is a warning. They want to destroy our life, and we will destroy them.”

Another Russian journalist, Masha Gessen, recently stated she is moving her partner and family to New York City, to avoid being separated from her children.