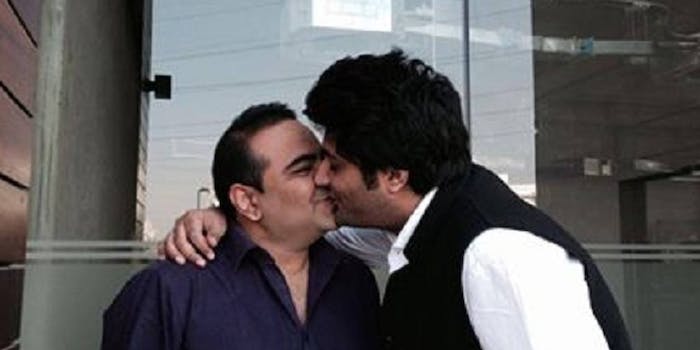 Engaging in intercourse “against the order of nature” carries a 10-year penalty.

It’s entirely expected that colonial-era India banned homosexuality in 1861. It’s not even a surprise that the antiquated law stood on the books 148 years, until the portion of it outlawing consensual gay sex was struck down as unconstitutional by the Delhi High Court in 2009.

But what outraged LGBT community in India and supporters around the globe this week was the Supreme Court of India’s decision to reinstate the law, making it illegal once again to have an intimate same-sex relationship in the billion-person country. People found guilty of engaging in what the law calls intercourse “against the order of nature” can be sentenced up to 10 years in prison.

It didn’t take long for the fury over the court’s decision to pour onto the Web, taking the shape of a “Gay for a Day” movement that swept Facebook.

On an event page created by Tanmay Sahay, people were encouraged to show their support by kissing a friend of the same gender in protest of the law. Photos of these publics acts of affection/defiance were posted to Facebook feeds or made into profile pictures.

While some featured a demur peck on the cheek, others flaunted a full-on smooch. More than 4,200 Facebook users joined the event as of publication time Friday afternoon.

Sahay, a married, 30-year-old New Delhi resident, said he realizes “Gay for a Day” is an “oversimplification” of a complex issue, but he felt it was an important first step as a public rallying point for the cause.

“The response is overwhelming,” Sahay told the Daily Dot. “When I started the page, it was with the intention of making a show of support to the LGBT members in my immediate network (friends, family etc.) However, I think my sentiment was that of an ordinary person and resonated with everyone.”

Sahay posted this photo to get things started: 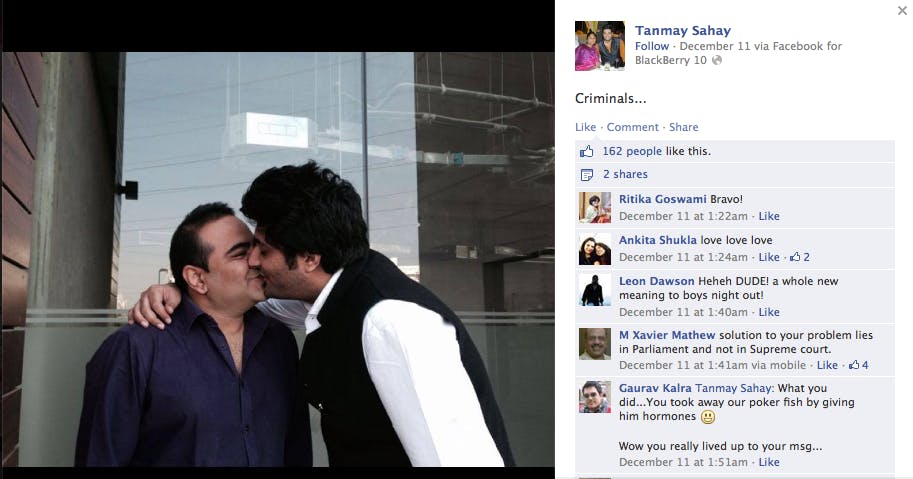 “We must not forget we are the world’s largest democracy and it is important for us to set the precedent, especially if, as a nation, we hope to play a significant role in the socio-cultural development in the 21st Century,” Sahay said. “Don’t forget, we are a young country (almost 50 percent of our population is below the age of 30). So we feel if we can set the correct foundations today, they will yield a better tomorrow.”

More than 13,500 people additionally signed a Change.org petition demanding the repeal of the law.

Despite the passionate outpouring from LGBT community members and supporters, the future of the ban on acts of gay love is unclear.

In its decision, the Supreme Court of India essentially tossed the issue back to the Indian government, indicating that if change is to come, it must happen through the legislative process. Ahead of national elections this spring, LGBT activists may have a steep hill to climb convincing political leaders to take up the task while facing a still largely conservative Indian voting base.

In the four years since the original 2009 high court decision to decriminalize gay sex, more Indians have found the courage to come out of the closet and they’ve gained supporters. After this week’s court decision, they’re likely to emerge even more determined to create change.

“There is a much larger conversation which must take place in social, legal and parliamentary forums to truly create legislation that not only allows citizens basic freedoms like the right to choose their partner, but also protects citizens who make choices that may make them a minority,” Sahay said. “This is a fight for human rights”