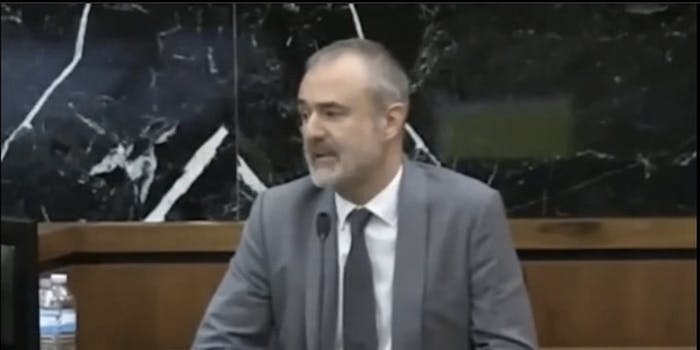 Footage from the Hulk Hogan vs. Gawker trial has been... repurposed. A little context, in case you missed it: When Denton took the stand midway through the trial, Hogan’s attorneys asked him to read from A.J. Daulerio’s 2012 blog post describing the sex tape in question. So here we have Denton, a graduate of University College, Oxford, reading this passage in an even, composed, quite British manner:

The point was apparently to discredit Denton’s characterization of Daulerio’s post as “sympathetic” to Hogan, but the effort may have backfired due to Denton’s calm performance.

Here’s Maria Bustillos, who covered the trial for Death and Taxes:

It’s a prank in the same vein as changing Gawker’s Wikipedia page to read “Owner: Hulk Hogan.” A very nice burn, certainly, but all this dancing on Gawker’s grave is likely premature. As Denton pointed out in his blog post Tuesday, the $140 million award is wildly atypical in a case like this, and far more money than Hulk himself had asked for. There’s also significant evidence that the trial jury wasn’t allowed to consider, including recently released documents that may show the lawsuit wasn’t about this particular sex tape at all.

Denton, having seen the documents after they were unsealed Friday, argues that “Hogan filed the claim because he was terrified that one of the other tapes, which memorialized his rant about his daughter dating ‘fucking niggers,’ might emerge.”

“A state appeals court and a federal judge have already held repeatedly that the 2012 commentary and short video excerpt, which joined an existing conversation and explored the public’s fascination with celebrity sex tapes, were newsworthy,” Denton wrote.