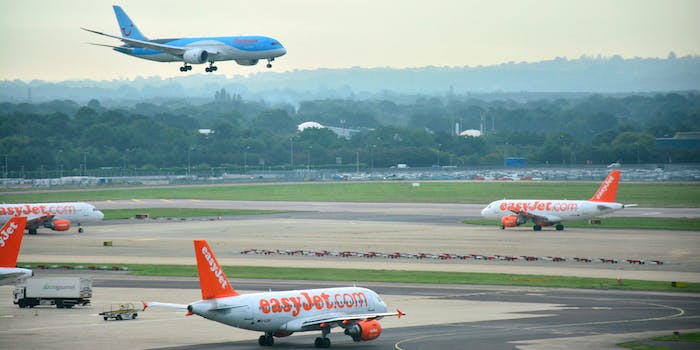 The drones that shut down London’s airport are now memes

Who would win: the police, or one 'droney boi?'

Winter travel is never fun, but Longdon’s Gatwick Airport is having a particularly rough time of it this year. Two industrial-grade drones reportedly flew a little too close to the international airport yesterday, causing a chaotic chain of events impacting around 110,000 passengers across 760 flights set for Thursday.

The problem began around 3pm CT, or 9pm GMT, after two industrial drones were spotted near Gatwick’s runways. To protect flyers, the airport ended up grounding all flights, impacting both departing and arriving passengers. Gatwick tried to reopen its airfields at 9pm CT (3am GMT), but after “a further sighting of drones” appeared, the airport closed its runways just 45 minutes later, according to the BBC.

Last night alone, 10,000 passengers were impacted by the drones’ appearance. The entire incident could cause a ripple effect for the airport that lasts for “several days,” the BBC reports. That’s in part because the passengers grounded on flights set for yesterday and today must be repatriated.

“It’s really busy. People are sitting everywhere, on the stairs, on the floors,” one passenger, Ani Kochiashvili, told Reuters.

Flight from Kiev to #Gatwick was due to land last night at 21.45. We landed in Birmingham airport. Now almost 4am, still on the plane, no food or updates from our crew. Not allowed to disembark. Bodies sleeping on every seat and across the floors. 🇬🇧🙏❤️✈️ #GatwickAirport pic.twitter.com/nBrPquEGFM

So Gatwick is shut due to drones so our flight TOM687 has been diverted to Stansted,so far we've been stuck on our plane for 4 hours.. a man has opened the plane door and put everyone at risk & then another guy says he's a terrorist Living pure hell right now 😥 #GatwickAirport pic.twitter.com/1qgF5mxsZf

Thank you got back around 6.30am a whole 9 hours after we should have been home by last night

We are now trapped @Gatwick_Airport. We are not allowed to exit the departure area. No sign of @wizzair @guardian @DailyMirror @BBCBreaking @BBC_HaveYourSay pic.twitter.com/XYqUZk9hoA

Gatwick has since turned to Twitter, warning Thursday flyers to check in with their airline before heading over to the airport.

“Our runway is still closed because of drone sightings,” Gatwick tweeted at 8:16am CT. “Flights are cancelled up to at least 16:00 [10am CT] today, while we constantly review the situation. Please do not set out for the airport for your flight without checking with your airline first. We’re sorry for the disruption.”

A tweet sent to one flyer warns that Gatwick anticipates the disruption will “continue throughout the day and into tomorrow.”

14.15: Our runway is still closed because of drone sightings. Flights are cancelled up to at least 16.00 today, while we constantly review the situation. Please do not set out for the airport for your flight without checking with your airline first. We're sorry for the disruption

2/2 We are extremely disappointed that passengers are being affected, especially at this time of year. Our advice continues to be not to travel to the airport and to check with your airline on the status of your flight. pic.twitter.com/65N8Dbt1Wl

Hi Nicolas, we anticipate disruption to continue throughout the day and into tomorrow. I'm sorry I can't tell you more right now about your flight at the weekend, but please check back nearer the time. Thanks Em

In the meantime, Sussex Police claim the drone sightings aren’t a form of terrorism, but they are a “deliberate act” to disrupt the airport. Police refuse to shoot down the drones because stray bullets could hurt bystanders, so instead, over 20 units are searching for the drones’ operator.

“We also have the helicopter up in the air but the police advice is that it would be dangerous to seek to shoot the drone down because of what may happen to the stray bullets,” Gatwick Chief Operating Officer Chris Woodroofe said, Reuters reports.

Twitter, meanwhile, is doing what it does best: drone memes.

The Gatwick drone palaver has reminded me of the world’s most pleasing gif. pic.twitter.com/tgInzNXdPM

We always wondered what those upward-pointing guns on the bow castle of the Mary Rose were for.

Piers Morgan even has a hot take on the shutdown.

Some idiotic berk with a drone bringing one of our biggest airports to a standstill for 14hrs just about sums up the hapless, impotent, chaotic state of Britain right now.
Can we get a bloody grip please?

No one in the country knows more about droning on than Piers.

Listen to the fella, Britain!

One of the drones now has a Twitter account, where it tweets statements like “I am not Russian” and “Aaaah just had a battery change.” It’s unclear who runs the account, which has nearly three dozen followers.

I am not Russian #drones #gatwickdrones #Gatwick #drone

For the record, the whole drone disruption is incredibly illegal. The U.K.’s drone laws from July 2018 outright ban drones from flying above 400 feet and prohibit users from flying them within .62 miles of an airport. Breaking the law comes with a maximum sentence of up to five years in prison or an unlimited fine, including both, Sky News reports.

That said, Gatwick’s drone woes raise larger questions about policing and monitoring drones to prevent disruption at airports during some of the busiest times of the year, like the holidays. After all, the law can prohibit drones near airplanes, but all it takes is one stray “droney boi” to disrupt over 100,000 passengers’ day.