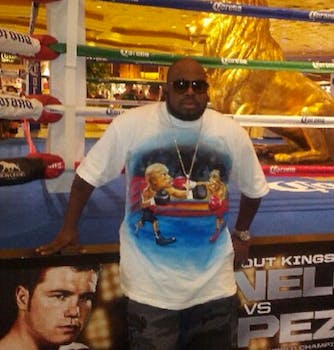 Off-duty or not, Maurice Gattison's songs could harm or impede his police department, which makes them unprotected speech.

In the music video for the hardcore hip-hop track “Temper Like an Alcoholic,” rapper Gat the Great can be seen flashing money stacks while draped in big chains and fur jackets.

He’s spitting homophobic slurs and insinuating violence to anybody who dare cross him. He pounds a closed fist into an open palm. His collaborator carries a medieval mace. He’s posturing—and it works. The song is very good, but it also may end up getting Gat the Great into a whole mess of professional troubles.

That’s because Gat the Great is better known as Maurice Gattison, president of the Irvington, N.J., police union, and his bosses within the Irvington Police Department are none too pleased with the fact that he’s spent his off hours rapping about violence and homophobia. On Tuesday, authorities within the Irvington Police Department told Newark’s Star-Ledger that the office was looking the rapper’s collection of videos—which were largely recorded in November but have since been taken offline—and considering disciplinary action.

“The Irvington Police Department has standards of conduct that apply to on-duty and off-duty behavior,” police director Joseph Santiago told the Star-Ledger.

“Those standards have consistently been applied in circumstances where the officer’s private behavior undermines the police department’s position in the community or creates the impression that its members may not be able to fairly enforce the law.”

Gattison’s videos aren’t explicitly violent or promoting of hate speech, but they do tie him to the IPD. The policeman holds a gun to his hip in the video for “Temper Like An Alcoholic.” At one point, you can see the IPD badge on his chest.

Those types of implications Gattison hopes will fall under the blanket of free speech, but that may not turn out the case. As Eugene O’Donnell, a legal professor at Manhattan’s John Jay School of Criminal Justice, told the Star-Ledger, there’s a difference between the First Amendment and saying whatever it is you want to say, no matter the conditions or circumstances.

“Your free speech off-duty is not unlimited,” O’Donnell said. “Things that can impede the agency’s work, cause disgrace to the agency or subject the agency to ridicule can be legitimate issues for internal action.”

Santiago has until the end of March to file charges.