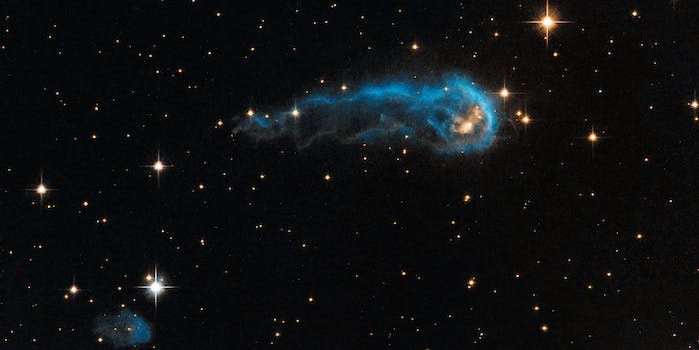 He's a glutton for burns.

This guy “Gary P Jackson (RAT),” who goes by @gary4205 on Twitter, must truly enjoy being humbled by smart women on the internet. Earlier this week, he rudely tried to lecture Australian astrophysicist Katie Mack on the subject of climate change.

Dr. Katherine J. Mack responded with a simple factual statement that owned Gary six ways from Sunday: She has a freaking Ph.D. in astrophysics.

Her retort was so perfect that author J.K. Rowling declared: “The existence of Twitter is forever validated by the following exchange.”

The existence of Twitter is forever validated by the following exchange. pic.twitter.com/f3TciHPFFh

You’d think that Gary, a self-described conservative whose Twitter timeline bespeaks strong #NeverTrump tendencies, would leave well enough alone after the revelation that he was harassing an actual doctor of astrophysics. After all, overwhelming scientific consensus indicates that climate change is real (and it’s spectacular!)

“Multiple studies published in peer-reviewed scientific journals show that 97 percent or more of actively publishing climate scientists agree: Climate-warming trends over the past century are extremely likely due to human activities,” says NASA.

Apparently none of the studies they cited are “real science” enough to satisfy real science expert A Random Conservative Blogger Named Gary.

So, after laying low for two days, Gary resurfaced in Katie Mack, Ph.D.’s mentions, telling her to “ask for a refund” on her advanced degree.

And once again, he was owned. Turns out she got a Princeton grant and a fellowship from the National Science Foundation. A foundation for, if you will, real science.

If you think you know better than vast majority of world's climate scientists, some random astrophysicist isn't the one you need to convince

Why would Gary keep subjecting himself to this argument? One can only conclude that he derives some enjoyment from being very wrong, very publicly, online.

Despite how exhausting this must be, Dr. Mack is gracious in victory. She would not have others do unto Gary as he has done unto her:

Tweeps it is not necessary to tweet at Gary, I think he knows what happened by now

Mack, who now has nearly 65,000 followers, told BuzzFeed she gets trolls all the time but tries to resist calling them out. “I just thought it was kind of hilarious that someone was telling me to learn some science,” she said.