Are we the new serfs of the Web?

There's been a lot of talk about the new digital economy. Is it really based on a very old model?

There’s a new mood around town, one that’s looking a little more critically at the changes the Internet Era have wrought. At the end of May, Palo Alto native George Packer devoted a lengthy New Yorker article to how the innovation culture known as Silicon Valley has, like an Oklahoma tornado, upended not only on his own but the hometown roots of the whole nation. Despite its relentless braggadocio about being democratic and uplifting, the newly dominant culture turns out to be insular, indulgent, inequitable and, so obsessed with algorithms that it can seem uninterested in even brushing against the human world around it.

About a week ago, Jaron Lanier described in stark and dismal terms the new digital economy:

“Jobs involving communication and expression (music, journalism and so forth) are suddenly much harder to come by, because information is now held to be free…. Alas, there are [now] only a few genuine success stories. Almost everyone else in the game lives on false hope, accepting the benefits of an informal economy—reputation and barter—while helping a small, distant elite build real wealth. Instead of a bell curve, the distribution looks like a razor-thin skyscraper dragging an emaciated “long tail” behind it.”

In this crave new world, I just spent a long day trying to stash an enormous set of late 19th Century, gold-rimmed handmade Limoges china that was priceless when my great uncle purchased it as a young groom. All efforts to sell it failed. The 21st century has made its fragile elegance a different kind of priceless: totally without value. Dear friends on the Atlantic seaboard who for decades specialized in six and seven figure exquisite America antiques are being thrown out of business by the same cultural shift. Ditto a dear friend on the Pacific rim who has folksy Asian art that perfectly expresses humanity, not machinery. Antiques today, she says, means ’50s and ’60s stuff, mid-century modern made in the rise of the same technology that is erasing the human hand. (Yes, handwriting is now being expunged from school curricula.)

No wonder the Millennium proclaimed the end of history. Virtual reality is the new New World, so everyone has rushed to evacuate the hard reality of the past. And to where are we running? Lanier asks us, who owns the future? The truth is, those who own the past have the most purchase on the future. 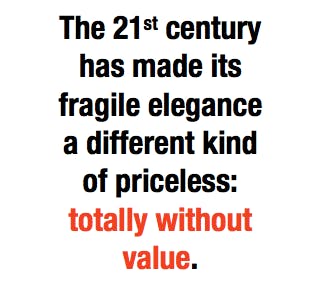 There is no difference between the colonizing of the New World America and the capitalizing of the new world of the Internet. They are simply different iterations, a recycling of the same old American dream. This country was founded not by pious Pilgrims, but by the irrational exuberance of a gold rush: giddy Brits hungry to fish profits from the discovery of huge cod schools in the Gulf of Maine. Salivating to be lords of luxurious fiefdoms, England’s newly gentrified merchant class scrambled to establish onshore plantations in the new world so they could own it. With dreams of unfettered monopoly, ambitious syndicates relentlessly seduced fishermen with scabrous settlement offers to populate the land and work the sea for free.

Of course only the moneymen ever see the money, again and again. Those who didn’t quickly meet the profit expectations of sponsors (who usually knew almost nothing about conditions on the ground) were left to die on the shores of New England. And then again by the railroad barons, in the breadbasket of the Midwest; and again on the plantations of the South.

As advanced and as enlightened as we supposedly are, today’s Internet recalls an even older kind of relationship: one that had its heyday in darker, medieval times. 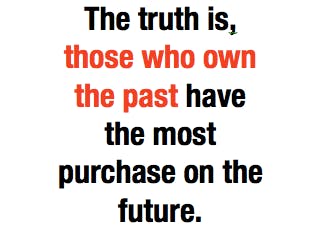 Once upon a time the landed gentry, that quaint old-fashioned 1% who we still adore to watch in their Edwardian finery on Masterpiece Theater, controlled the fields of food, and the leftover 99% had to work its land to eat. As we know, when capitalism launched the Mercantile and Industrial Ages, that arrangement evaporated. The branded gentry owned the fields and factories that produced things people needed as well as the stores that purveyed them. To eat, everybody else had to get on board or on the assembly line or in the cubicle where they simply became a cog in the assembly line of consumption. When the Iron Curtain fell and capitalism won, computers barged in, giving us a new kind of assembly line and cubicle.

Today, the whiz kid, whiz-bang whizzes of Computerstan like to swear they’ve changed the world for good because they care about ideals; because they sent old-fashioned, plutocratic exploitation bye-bye. But the New World of today is no different: it, too, has a clannish gentry that owns almost all the fields that provide food for thought—those wide-open computer spaces the rest of us, as desperate as our ancestors to survive, work in and glean. 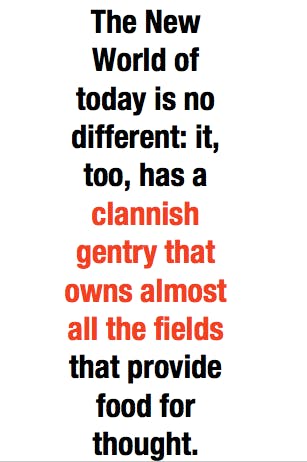 Billionaire site owners don’t seem to have to care if we don’t have money to pay our rent or, ironically, broadband costs to perform for them. Writers are asked to write for free. Photographers to photograph for free. Chefs to cook and create recipes for free. Craftsman teach their craft in online videos for free.

What’s different this time—what truly has ended in history—is that no matter how much we produce, the overlords don’t have to give the measly cents we need to survive. The Lord loves a cheerful giver and so do all those Valley folks making a mint off user-generated sites. The land of the free has truly become the home of the brave. Before Packer chimed in, best-selling author Scott Turow used a Sunday Times megaphone to sound the alarm for the “slow death of the American author” thanks to “the new, global electronic marketplace rapidly depleting authors’ income streams.”

A web or a net were once traps one could get snared in—and that has not changed. The 13th Amendment insures no one is dragooned into involuntary servitude, but voluntary is OK, so it’s the loophole the lords of the Internet fiefdoms drive their profits through. Draconian contracts professional content providers are required to sign force them to give up absolutely everything, including their ability to protest the slicing, dicing and pricing of their own name, face or material as it spins forever in the widening circle of aggregators and virtual life, even when it brushes dangerously against the Fair Use guidelines of copyright law.

By definition, a contract should be a quid pro quo, but it’s hard to find one in website provider docs that say: “Without further obligation to you and without limitation, we may use, reproduce, publish, sell, perform, distribute, display, exhibit, edit, change, add to, take from, translate, reformat, make derivative works from, or reprocess the Contribution in any manner.” The sharing, the equality, and democracy so proudly touted as the mesh of the Web comes down to: we give, media companies take, and shares rise.

Oh, but wait. They do give. As they keep saying to seduce us to sign up, we get exposure! We get to build name recognition! We get to show our stuff! “We unfortunately can’t pay you for it,” Atlantic.com told a disgruntled Nate Thayer, “but we do reach 13 million readers a month.” Huffington reportedly lures her unpaid bloggers with estimates of 250 million eyeballs. 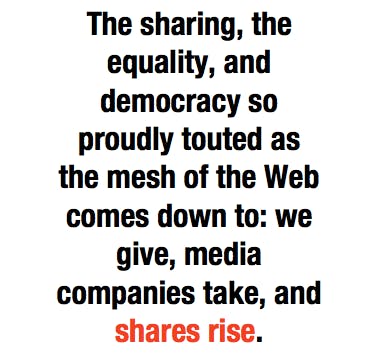 Eyeballs are the latest in American snake oil salesmanship. In a bizarre version of American Idol, we are put into gladiatorial contests to knock out eyeballs for the overlords of the Internet terrain. If enough people bother to click LIKE, we get even more exposure because the Caesars can sell our work to other sites that, as they say, “curate and repackage.” Yet still not a cent for rent in all that exposure or compensation from all that “repurposing”, and as any medical professional knows, people who can’t get food, water and warmth can, like the original colonists, die from exposure.

If we don’t “like” being exploited serfs required to go at it for no pay, no worries. This is the 21st Century! There are thousands of others breathlessly hungry for algorithms that promise 15 minutes of being noticed.

Packer and Lanier are telling us there’s something about Silicon Valley that doesn’t compute. What does online popularity really get us—is there any actual value? What do those eyeballs mean? It’s ephemeral stuff, that’s for sure. When you get right down to it, plowing the land gives farmers the tangible result of food to eat. But we get nothing for food for thought. Is this the new serfdom of surfing?

Formerly a reporter, Sandra Garson is now a writer and teacher. A regular blogger for Beliefnet, she is the author of Veggiyana, the Dharma of Cooking and How to Fix a Leek and Other Food from Your Farmers’ Market and founder and president of the Buddhist food charity Veggiyana. Garson is an eHow cooking expert and an advisor to several culinary businesses.