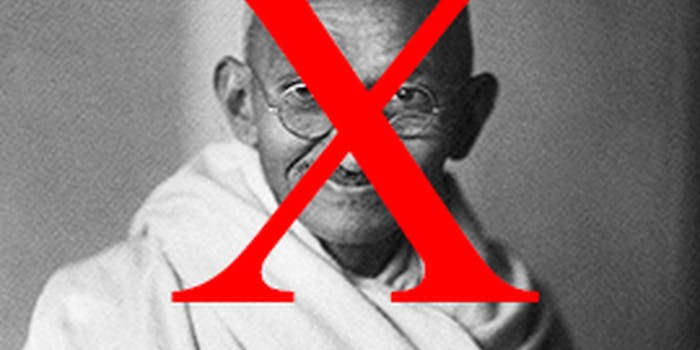 The Facebook pages of Second Amendment proponents dropped on Facebook last week after sharing a quote by Mohandas Gandhi.

It was a dark day on social media for pro-gun enthusiasts last week. From journalist Amber Lyons to radio host Adam Kokesh, the Facebook pages of Second Amendment proponents dropped one by one in a spate of mystery suspensions that had pro-gun enthusiasts crying censorship.

However, a Facebook representative told the Daily Dot the company never censored a thing.

According to Mike Adams, the Facebook page for his site Natural News was suspended on Dec. 27, after it posted an image of Mohandas Gandhi superimposed with the following quote:

“Among the many misdeeds of British rule in India, history will look upon the Act depriving a whole nation of arms as the blackest.” – Mohandas Gandhi, an Autobiography, page 446.

Other conservative activists soon noticed their accounts disappearing too. InfoWars tabulated the damage, concluding that at least 20 accounts that carried “pro-second amendment and pro-liberty information” had “disappeared.” (Most of the Facebook pages are back up now, included Natural News’s.) Many reported seeing the following message, which seemed to indicate they’d posted something that violated Facebook’s policies, but didn’t specify which one in particular (there are a lot):

Was Gandhi too hot for Facebook? Not according to a company representative, who told the Daily Dot, “We have no record of removal of the Gandhi quote at this time.”

So why were the accounts really suspended? Unfortunately, the representative wasn’t willing to go on record to elaborate. This is a general, and flawed, company policy. Facebook flat out refuses to comment on individual accounts. On a macro scale, that makes sense: It’s easy to see PR reps bogged down with myriad media inquiries about every small decision the company makes (and there’s also the ever-present threat of privacy violations).

But at the same time, the policy fails spectacularly at protecting Facebook’s image, as it sets the company up for miscommunications on a massive scale. If Facebook really had no political motivations for banning the pro-gun Facebook accounts, the 58,000 people who shared Adams’s Facebook post deserve to hear about it. And Facebook would only benefit from being forthright and honest about what happened.