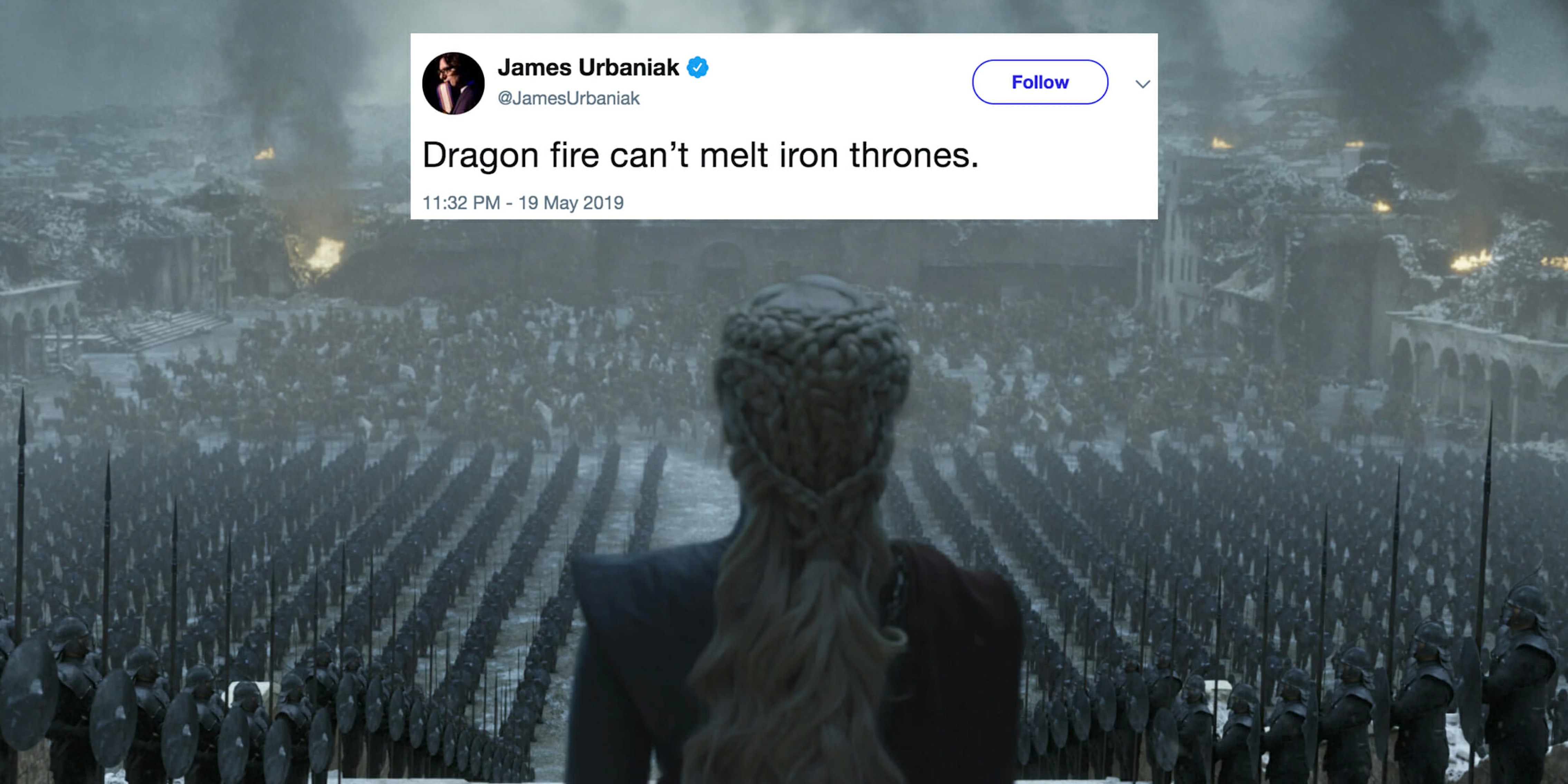 The series finale of Game of Thrones on Sunday finally revealed the long-running drama’s conclusion. More than 1 million fans remain unsatisfied, though, given their signatures on a petition to remake season 8 with “competent writers.” Perhaps as a sly reference to this, many Twitter users have started jokingly claiming the battle of King’s Landing was an “inside job,” referencing a 9/11 conspiracy theory meme older than Twitter itself.

If you only crawl the saner corners of the internet, you may not be familiar with the meme. It came about after the 2001 terrorist attack, amid unfounded accusations that the New York City residents fleeing the debris were crisis actors and that the whole thing was some elaborate government plot. The baseless theory posits: How could structural failure bring down the twin towers when a plane’s fuel can’t burn hot enough to melt the steel beams holding up the buildings? The only answer, according to the conspiracy, is that 9/11 was an inside job by the U.S. government.

The mental aerobics required to reach such a conclusion instantly became a meme. While steel may not melt at the temperature jet fuel burns, it begins to lose integrity at far lower temperatures, according to Jefferson Lab, which easily could have caused the failure. The fact that the theory is so easily dispelled by a simple Google search also lent to its virality.

Fast forward to present day, when most of the world watched Daenerys’ last remaining dragon, Drogon, completely melt the iconic iron throne early in the episode with his fire. Fans posted tongue-in-cheek nods to the bizarre logic of the “melted steel” meme.

A few users previously pointed out the theory after the second-to-last episode, “The Bells,” in which Drogon similarly destroys stone buildings while obliterating the people of King’s Landing. Obviously, the fall of the Red Keep had to be an inside job.

Kingslanding was an inside job. Dragons Fire burns at 1200C while the stone slabs/ marble burn at 1370C. Cersei knew this and knew someone would kill dany for blowing up the kingdom so she set up some controlled dets to frame her. What an amazing plot twist.

Was the destruction of King’s Landing an inside job? All I know is that dragon fire can’t melt steel beams.

Drogon: the sight of this accursed thing sickens me. This throne stands as a symbol of the oppression of the proliteriat, and as long as people seek it, this world will never know peace. Dragon fire can't melt steel beams, but on my honor, I shall liquefy this sham

Maybe the whole thing was Ghost’s revenge on Jon Snow for leaving without petting him after the Battle of Winterfell, Twitter User @Ughx3000 suggests.

This was all an inside job orchestrated by Ghost so he could get Jon's pansy ass back to the wall.

And of course, Daenerys’ firey stroll through King’s Landing must have been fake as well—just a bunch of actors and controlled demolitions. This idea becomes especially funny when you consider fans’ vehement disapproval of this narrative twist.

So, was Daenerys’ storming of King’s Landing an inside job? Game of Thrones creators David Benioff and D.B. Weiss haven’t denied it yet, which means it must be true—if you think like a conspiracy theorist.