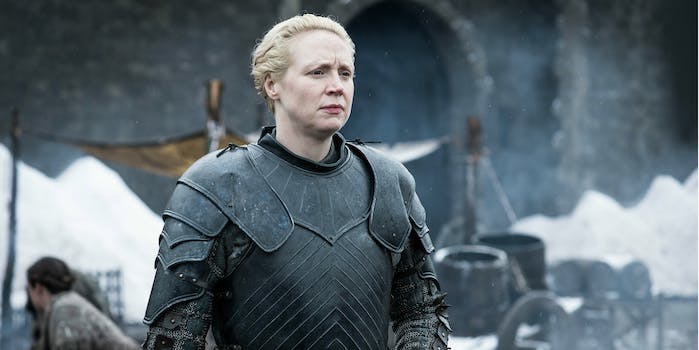 We’re hurting for the broken hearts of Winterfell

A lot of hearts were broken in Sunday’s emotional episode of Game of Thrones.

In the calm after last week’s heart-pounding battle, the heroes of HBO’s beloved series reached King’s Landing. Before they exchanged what looked to be their final words with Cersei, however, several beloved characters saw their romantic dreams dashed.

Fans finally got to see a long-desired relationship come to fruition in Jamie Lannister and Brienne of Tarth, only to have it snatched away moments later. Gendry became a lord—therefore fully qualified to marry a lady—only to realize he could never have a future with Arya. And Tormund. Poor, lusty Tormund never had a chance with Brienne.

With all the heartsick characters roaming around on Game of Thrones, memers had plenty of material to work with.

The Brienne memes mostly just made us sad all over again.

They’d better fix this from GameOfThronesMemes

Everyone after Jaime leaves Brienne: from GameOfThronesMemes

i swear yall better not make her cry ever again #GameofThrones pic.twitter.com/nYBUUDy2MK

The Gendry memes were a bit harsh if you ask me, and were full of “friend zone” jokes.

Getting shot down hard from GameOfThronesMemes

He shot his shot tho. Respect. from GameOfThronesMemes

Not today gendry :’c from GameOfThronesMemes

*Gendry being all set to marry Arya after their one night, only to be rejected*#GameofThrones pic.twitter.com/0NFxLAinIz

Even though many of us were shipping the Brienne/Jamie pair-up, we were sad to see how the news hit Tormund.

My heart bleeds from GameOfThronesMemes

#GameofThrones
Tormund: And after all that, pic.twitter.com/O26H5AN1uA

Tormund Giantsbane crying over Brienne of Tarth is the softest thing that's ever happened on #GameofThrones pic.twitter.com/v54Aa3pUKQ

And even though last week’s episode saw far more character deaths, many people were hit harder by the emotion in “The Last of the Starks.” The next two episodes will likely see the final battle between Daenerys and Cersei finally come to a head. More characters will certainly lose their lives before the conclusion of the epic series, but for the next few days we can all settle in to nurse our wounds and cry for Brienne’s poor broken heart.