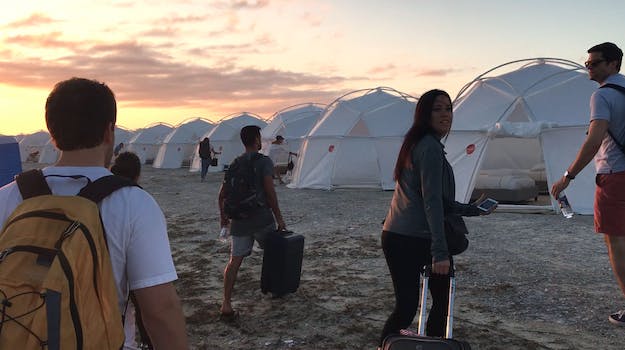 Fyre Festival—the 2017 event that turned out to be one huge scam that victimized rich millennials—is trending on Twitter once again almost two years after it was all everyone could talk about because of two new documentaries about it from Hulu and Netflix.

The apparent “feud” between these two Fyre Festival documentaries are a huge part of the reason Twitter users are talking about it. Hulu surprised everyone by releasing Fyre Fraud days ahead of the announced premiere of Netflix’s own film, Fyre—and on the same day, the review embargo was lifted for the latter. Hulu didn’t stop there.

The bigger shade Hulu threw Netflix’s original documentary is found at the end of Fyre Fraud, where it reveals that Fyre is produced by the same group that marketed the doomed festival, something the Daily Dot has mentioned in its review of the Netflix original.

Naturally, it did not escape Twitter’s attention, as user @sagesurge points out:

if any1 wants 2 laugh @ a bunch of rich entitled kids who placed their money & trust into #JaRule's hands, Hulus #FyreFraud doc is currently airing

watch til the very end….#Hulu points out #Netflix doc is produced by the same ppl who did the Social Media & cover up 4 #fyrefest

In fact, Hulu’s revelation about Netflix’s Fyre at the end of Fyre Fraud was the “most interesting part” to a lot of users:

Me when @hulu's #FyreFraud documentary takes pains to point out that @netflix's Fyre doc is produced by Jerry Media, who WERE THE SOCIAL MEDIA MARKETERS FOR FYRE FESTIVAL. pic.twitter.com/428mqUMRxc

I don’t know if you can really break the fourth wall in a documentary, but there’s a moment at the end of #FyreFraud on Hulu where they address the Netflix doc and it’s a hilarious point that kind of explains why they dropped it right before the Netflix one comes out

I just finished #FyreFraud on Hulu and…did they just discredit Netflix's entire documentary before it even came out?! Because an ex employee of the marketing agency involved in Fyre was in the Hulu doc, and said marketing agency is producing a Fyre doc with Vice???

While many have been waiting for Netflix’s Fyre Festival documentary to come out so they can watch the drama surrounding the disastrous event unfold on film (and “laugh at rich kids getting scammed”), it seems the two streaming platforms’ “feuding documentaries” have upstaged their very subject. Twitter is “obsessed,” as user @antonio_s_t points out:

So @hulu’s #FyreFraud documentary expose Fuck Jerry as one of the major promoters of the Fyre Festival? Then they release their doc before @Netflix’s Fyre Frstival doc (which btw is produced by Fuck Jerry). That’s the type fuck you energy I need for 2019

Someone please do a documentary about the warring Fyre Festival documentaries.

Also I just really love that @hulu dropped their #FyreFraud documentary secretly 4 days before the @netflix doc. Lmao that’s the kind of pettiness I live for.

Meanwhile, people are commending Hulu for the “win.”

So #FyreFraud exposes fuck Jerry for working on fyre festival and then shames the upcoming Netflix doc on fyre because it’s produced by fuck Jerry. Put that in the win column for Hulu.

So @hulu's #FyreFraud doc on the Fyre Festival is REALLY good! It mentions that the OTHER documentary releasing on Friday via @netflix is produced in part by Jerry Media, who did the marketing for… The Fyre Festival. THIS IS WILD. Also, shots fired @hulu! Bravo!

Regardless of Hulu’s alleged efforts to undermine Netflix’s Fyre, users have declared they will watch both documentaries, which USA Today considers “companion pieces,” each one bringing to light different facts about the festival. Chrissy Teigen echoed everyone’s fascination with the Fyre Festival documentaries when she tweeted, “Thank you to those of you who endured Fyre Fest, thus making these movies possible. We owe you. Thank you for your service and I am truly sorry they screwed you so hard.”

thank you to those of you who endured fyre fest thus making these movies possible. we owe you. thank you for your service and I am truly sorry they screwed you so hard

YES!!! That HULU doc was so good!! It was like a glorious train wreck! I cannot wait to watch the Netflix doc!

I will of course be watching both.

It remains to be seen how Netflix will respond to Hulu’s shady moves, if any new player will throw a more controversial Fyre Festival documentary into the ring, or if this week is the last time #FyreFestival will ever trend on Twitter.