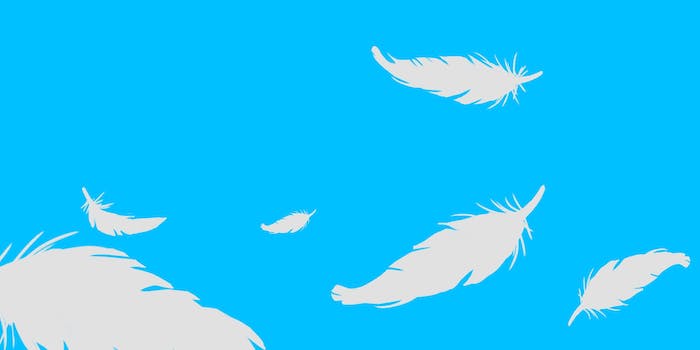 Shine a stream of ones and zeroes through the prism of this tweet and you'll see it contains multitudes.

In 100 years or so, anthropologists at whatever freemium Google app renders the world’s great research universities obsolete will start to ask, “What was the Internet like in 2015?”

There are a lot of ways they could answer this question. They could read hundreds of contemporaneous academic studies about how the growing dominance of social media platforms like Facebook and Twitter was transforming the online experience into highly-trafficked boulevards lined with walled gardens. Or they could interview someone who was a youngster back in 2015 about what it was like when their middle school nemesis had to reach all the way into his pocket for his smartphone to mercilessly cyberbully them instead of doing it from an ocular implant like a civilized denizen of the 22nd Century.

However, if these researchers want to stay true to the spirit of our time, they will be lazy and attempt to sum up the entire garbage cacophony that is today’s Internet in a single tweet. If I may be so bold, I would like to offer up this tweet as the most representative of the Internet in 2015.

Everything you could ever want to know about today’s online world is contained somewhere in this tweet. It shows how content is distributed, monetized, remixed, and monetized again. It lays bare the Internet’s cross-platform dance of irony and sexuality. It demonstrates the ability of celebrity culture to unify the highbrow and the low.

Shine a stream of ones and zeroes through the prism of this tweet and you’ll see it contains multitudes.

“I spent quite a while just immediately scrolling down to the bottom of these pages to look at the comments. I was dying [laughing] for hours reading some of them,” he told the Daily Dot. “Why? I don’t know, I guess I’m a bit childish. Who doesn’t want to be a little childish though?”

Sponsored social works by connecting companies with products they want advertised and producers of social media content with large followings. The companies pay the producers to push out posts that are effectively ads—whether they’re labeled as such or not. A 2014 report by the Halverson Group found that marketing professionals were more enthusiastic about sponsored social than any other form of marketing out there. It’s likely the single hottest thing in marketing right now.

Nevertheless, the account’s operator suspects he may ultimately bite the bullet and monetize his following on a regular basis, grumpy followers be damned. “One day may come where I do decide to purely just do it… for the financial support,” he said. “As anyone would know, it’s a lot easier to do something extra when you don’t have to worry about life outside of that extra.”

There are other videos on the site with the far more views. The infamous sex tape that rocketed Kim Kardashian to stardom has racked up more than 127 million, but 2.2 million views is nothing to sneeze at, especially for a furry S&M video with an appeal that might initially seem a little more, well, niche. However, the video’s success suggests that the Internet has normalized a lot of stuff, both in porn and and in everything else, that would have previously been considered fringe. When the algorithms that determine whether or not to show viewers a certain piece of content saw “TEEN GETS ASS FUCKED” was resonating, they went to town.

Nothing attracts attention like a crowd, and, for the uploader of the video, that attention can be profitable. The user who created the video goes by the handle kawaii_girl. She’s a part of Pornhub’s amateur payment program, where users can register with the site and get a portion of the revenue the platform generates running ads against the content they post. If a video created by someone in the program is featured by Pornhub (a decision the site makes based on views and ratings), they stand to earn somewhere between $50-150—although some have raked in over $800 on a single video.

Revenue sharing is an increasingly common model for social networks trying to incentivize users to consistently post content that attracts eyeballs. YouTube is baking the model into the very DNA of its gradually evolving platform platforms, and Facebook is getting into the revenue-sharing game on videos as well.

The goal for these platforms is to create roach motels of content where web users come in, but they don’t come out. That means building a way for content creators to earn some scratch. Another element is the need for individual users to participate—hence comments.

Sartre is a touchpoint for everything TheExistentialist does on the site, and the stock photo comment is no exception. University of Waterloo philosophy professor Dr. Patricia Marino, who serves as a co-president for the the Society for the Philosophy of Sex and Love, argued that the comment strongly echoes Sartre’s ideas on sex.

“As I understand it the idea of the quote is that sexual desire involves a way of responding to another person’s subjectivity—that is, to the person themselves in the first place, and only derivatively to them as a body. In his writings about sex, Sartre challenged the idea of a ‘sex drive’ linked to biology, positing instead that in responding to one another as people, we discover a capacity for sexuality,” Marino explained. “Since the aim of sex for Sartre isn’t pleasure, but more a way of relating to another person, orgasm is a problem because in bringing our attention to pleasure, we bring it back to ourselves instead of the other person, and the possibility of relating to them as a person in the desired way comes to an end.”

It’s heady, abstract stuff with serious implications about the moral frameworks in which we live our lives. And it is a world away from the writings of Donald Trump.

I have read exactly one of Trump’s books, The America We Deserve. Written in 2000 as Trump was mulling a presidential bid on the Reform Party ticket, the volume is a list of policy proposals ranging from a massive one-time tax on multimillionaires to an argument about how the United States, which accounts for one-quarter of the world’s prison population, isn’t putting enough people in jail.

The book is a lot of things, most of all a near-constant stream of free-associative self-aggrandizement, but intellectual it is not. Trump has been a public figure for decades, yet the reality TV star label he earned as the host of The Apprentice was the one that always seemed the most fitting. Trump traffics in a brand of nativist populism antithetical to abstract philosophy, especially that of a café-dwelling Parisian like Sartre.

While Trump has captivated much of the Republican base, there’s still a drive to treat the billionaire’s West Wing ambitions as something fundamentally different than those of career politicians like Hillary Clinton or Jeb Bush. That tension is why the Huffington Post announced earlier this year it would be funneling coverage of Trump’s campaign into the news site’s entertainment section rather than its politics vertical.

That tension is also what makes Trump the target of a constant stream of mockery. University of Colorado professor Peter McGraw, who has spent decades studying how comedy works, has theorized that laughter is how human beings deal with things that are at once scary and not scary at all.

“The idea is that humor arises from things that simultaneously seem wrong yet OK. Things that are confusing yet make sense,” McGraw told the Daily Dot in an interview earlier this year. “Things that are threatening yet safe. That creates some arousal, which turns positive when you also recognize this thing that’s bad is actually not bad. This thing that’s threatening is actually safe. It’s these benign violations that we laugh at.”

For people who disagree with Trump’s politics, pointing and laughing at his campaign’s foibles is a way of acknowledging that Trump’s campaign for the presidency is somehow problematic, but not worth moving to Canada over—not yet, at least.

The sheer noise of these conversations has allowed Trump to dominate online conversation in recent months. There are a lot of people tweeting and posting Facebook comments about him, and a very large percentage of that content is made up of derisive jokes. But even 15 years ago, Trump was self-aware enough to predict how his presidential run would be perceived. “Let’s face it, if I run it will be a boon to the political cartoonists and late-night talk-show hosts,” he wrote near the end of The America We Deserve. “But I can take it.”

University of Illinois philosophy professor Helga Varden, who is also a co-president of the Society for the Philosophy of Sex and Love, argued that the schism here between personal pleasure and empathetic connection mirrors the gap that defines Trump’s presidential campaign—the one between the candidate’s enormous ego (the fundamental building block of his public persona) and the necessary self-sacrifice of being the America’s highest public servant.

All that from a joke tweet. Thanks Internet, you did great on this one.