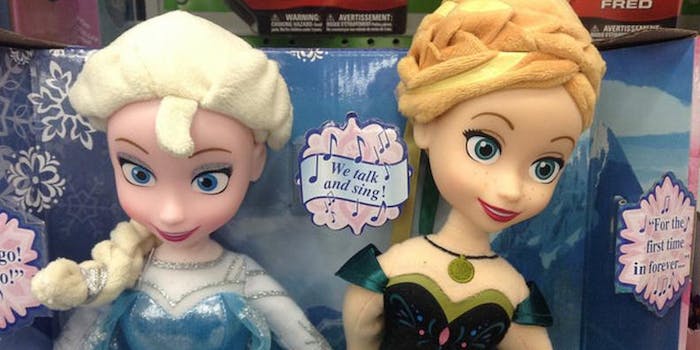 Last Christmas, pretty much every little girl in America asked for the same thing: a Princess Anna or Elsa doll, from the Disney movie Frozen. But one dad decided to get a little more creative with his daughter’s present.

Instead of getting his daughter a Frozen doll for Christmas, he got her the daddest dad joke known to man: an actual frozen doll.

While you’d think the little girl would be impressed with her father’s wordplay and Amelia Bedelia-esque sense of literality, shockingly, that was not the case. In fact, she doesn’t seem too pleased about it.

Nor, for that matter, were the YouTube commenters who watched the video. “That’s fucking cruel,” one person wrote. Another said, “This is disgusting. Christmas isn’t the time to make bad jokes for your children. This father should feel ashamed.”

Relax, guys. I mean, if the frozen doll in the video was actually a Frozen doll, all she’d have to do is wait a few hours for the ice to melt to get the Princess Anna or Elsa doll of her dreams. And think about how much effort it took on the dad’s part to a) procure the Frozen doll (which were not easy to come by this Christmas), b) think of the pun, and c) actually go through with it.

A few years from now, this little girl will likely come to appreciate the dadness of her dad’s dad joke. But even if she doesn’t, she’ll most likely get over her dad’s prank and—dad joke alert!—Let It Go by the new year.