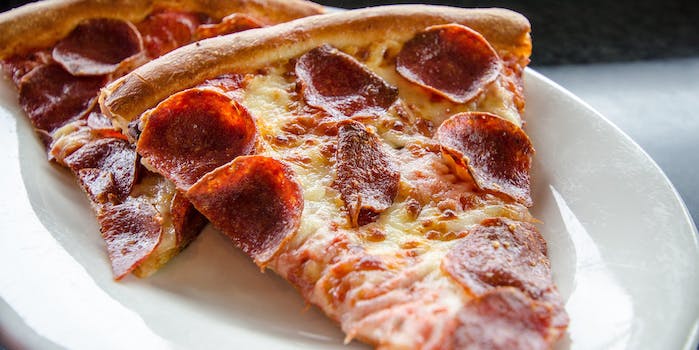 There’s nothing more sacred than a tasty lunch you’re looking forward to eating. So when someone else gets their grubby fingers on, let’s say, your slice of pizza, it’s most definitely going to send you over the edge. How dare they take a bite of your cheesy bliss, right?

Considering these unspoken rules about other people’s food, it’s little wonder all hell broke loose when Dee Breezy crossed the line and ate some of his girlfriend De’ja‘s pizza in what I like to call #PizzaGate. Breezy snapchatted the entire meltdown, writing, “she turning up over pizza.”

In the video, she’s telling it like it is, letting him know it was really damn rude of him, especially since she offered to get him some pizza, but he said he wasn’t hungry. Obviously he was if he ended up getting in on her slice. Hell, even the people behind De’ja had an opinion on #PizzaGate.

But that wasn’t the end of it. De’ja texted her boyfriend, elaborating on why she was so upset over the situation.

Can somebody get her pic.twitter.com/6zku47WVmp

The video has caught fire on Twitter. Since it was posted on Tuesday evening, it has amassed over 28,000 retweets and 31,000 likes. It’s even inspired the hashtag movement of #EatHerFood2016.

Breezy tried to make another point about De’ja’s long rant.

Yes, while that may be true, it’s the principle! Come on, man. You can’t disrespect your girl like that. And a lot of people are understandably siding with the lady in this cheesy chaos, feeling like they really connect with her.

@xoleina I feel her tho..she clearly wanted the WHOLE slice so even if u just wanted a piece u shouldve gotten a slice 4 urself

Now known as the “pizza girl,” De’ja has been popping up on people’s timelines everywhere standing up for her fundamental pizza rights. Thou shalt not covet. And thou shalt not eat your partner’s pizza.

Add it to the book of virtues, kiddos.

Update 2:26pm CT, July 6: An earlier version of this story identified Dee Breezy by the wrong name and stated that Breezy is just a friend when he’s actually De’ja’s boyfriend.