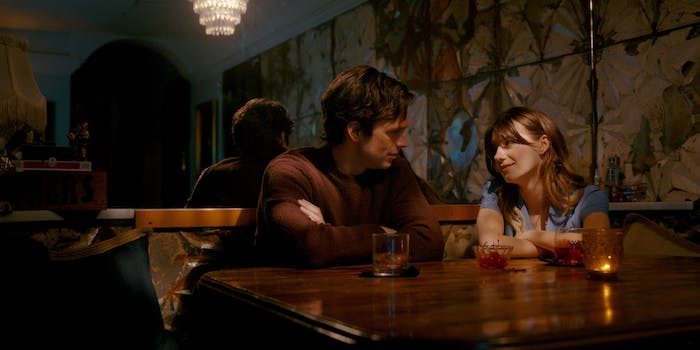 ‘Fresh’ serves up stylized body horror on a platter

Sebastian Stan stands out as the charmer who takes a darker turn.

By the time that Fresh, director Mimi Cave’s feature directorial debut, starts to bare its teeth with a stealth title card, it’s lulled our senses into one kind of film when it turns out that it’s very much another. What starts out exploring the specific hells of modern dating soon becomes a much meatier metaphor, one that Lauryn Kahn’s script bludgeons you on the head with repeatedly throughout its 114-minute runtime. It’s provocative and twisted feminist tailspin, one that doesn’t hold back on the gore factor and lets Sebastian Stan flex some new muscles, but most of its characters are underdeveloped and some of its more eclectic choices are a reminder that even its designed shock factors might fall flat.

RELEASE DATE: March 4, 2022
DIRECTOR: Mimi Cave
STREAMING: Hulu
A young woman fed up with dating apps meets what seems like the perfect guy until she learns during a weekend trip what he’s really up to. While a provocative and twisted film that lets Sebastian Stan go off the rails, it also reminds you of other films and shows that have touched on some of the film’s touchstones more successfully.

Fresh zooms right in on the very familiar dating woes of Noa (Normal People’s Daisy Edgar-Jones), who, despite her attempt to view her search for love with optimism, is mostly left with poor results and the kind you’d expect to see at the start of a rom-com. Swiping through dating apps brings Noa gross pick-up lines and unsolicited dick pics, and one dinner ends with her date criticizing her outfit, taking her leftovers, and negging when she refuses to kiss or go home with him. It’s one of many, many disappointments, one that leads her friend Mollie (Jojo T. Gibbs)—who doesn’t seem to have much characterization aside from being the Black and bisexual best friend who serves as a sounding board for Noa’s dating woes—to complain about how some of the Disney Princess movies gave them unrealistic expectations about what happily ever after looks like.

So when Noa—accustomed to dating apps—has a meet-cute at a local grocery store with Steve (Stan), a cosmetic surgeon who engages with her about cotton candy grapes, she’s open enough to give him her number when asked because he cleared the very low bar of not being piggish when talking to her. Sure, Steve might not have Twitter or Instagram accounts for Noa and Mollie to properly stalk, but Noa is in fuck-it mode, going as far as to tell Steve on their first date that “people who believe in true love are fucking idiots” in-between bouts of dark humor.

Edgar-Jones and Stan have a good rapport, so it’s easy to get a little caught up in the whirlwind of their romance and even forget what kind of movie we’re watching until Noa and Steve’s romantic weekend getaway becomes anything but. And the red flags Noa missed before stand out even more to Mollie once Noa doesn’t come back home.

Once the delectable horror show pulls ahead full steam, Stan fully commits to embodying the horrors at bay. If you’ve only seen Stan in the MCU, Fresh is a much different beast, and seeing him walk the tightrope from a charming love interest to a nightmare beyond someone’s imagination is a delight to watch. Steve takes pride in his work, and a blend of psychopaths like Patrick Bateman and shows like Hannibal and even Yellowjackets might come to mind. Stan even goes as far as channel Oscar Isaac in Ex Machina in a dance sequence that might make for a fun out-of-context GIF—but, with the context, is a lot more sinister. Edgar-Jones holds her own, especially once she can start fighting back.

Once the horror show begins, Cave’s direction becomes much more stylized and gory, even as it’s depicting or attempting to subvert tropes, although sometimes the subversion serves as more of a distraction, and dark lighting makes some of the action hard to see. Fresh isn’t afraid to lean into the absurd as it gives us glimpses of the bigger picture, and it’s not above the low-hanging fruit or a few groan-inducing puns. It may not be saying anything new about dating or how patriarchal society views women—especially once you whittle it down to the bone—but the more specific it gets, the more it makes a hell of a first impression.

Fresh premiered at the Sundance Film Festival and will be available to stream on Hulu on March 4.