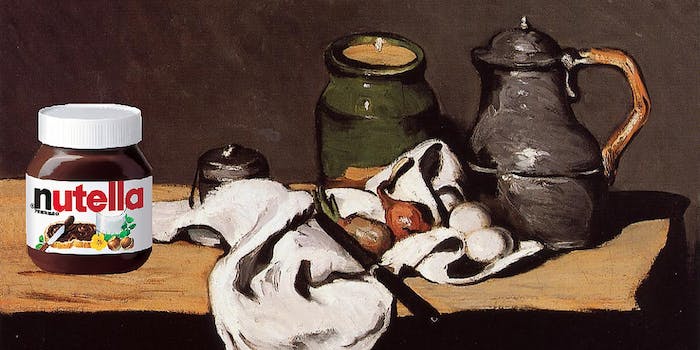 It's almost as bad as Dweezil and Moon Unit.

In the bad parenting hall of fame, there should really be a special section reserved for those who give their children ridiculous names.

Enter the French who ruled that the parents of a baby born in September could not name their child “Nutella.” Yes, you read that correctly—nutella, as in the Internet’s favorite hazelnut treat. “The name ‘Nutella’ given to the child is the trade name of a spread,” read a translation of the court’s decision. “And it is contrary to the child’s interest to be wearing a name like that can only lead to teasing or disparaging thoughts.” Apparently, the Nutella-loving parents in question failed to show up for court that day, so the judge also ruled that the baby would be renamed Ella, in substitution for their first decision. The Internet quickly picked up on up on the story, and it spread more quickly than hazelnut on toast.

A judge in France has ruled a couple may NOT name their baby "Nutella"…..but this is America so don't let THAT stop YOU!

Good on this judge overruling these bozo's baby name choice. We all know that Nutella is more of a boys name pic.twitter.com/OUYnp80aYQ

Couple that was told they can't name their baby Nutella because it's a 'trade name' settle on 'Generic Hazelnut Spread' instead.

In the Internet age, this is becoming an increasingly common practice. 2012 saw 146 babies born with the name Khaleesi (which is somewhat ironic, since technically that’s a title, not a name). By 2014, it became the 18th most popular candidate for female baby names around, while Katniss had climbed to number 14 and slightly more ordinary picks like Hazel (The Fault in Our Stars) and Elsa (Frozen) were in the mix last year. One can only wonder how long it’ll be before Starlord shows up on the list for baby boys or Maleficent makes an appearance on the girls’ list. While these acts of fandom may sound like a good idea to parents following TFIOS on Tumblr, they’re less so for their kids.

“Wait,” you might say. “What about celebrities? Don’t they give their children made-up, nonsensical names all the time? Don’t the same rules apply to them?” The truth is that they don’t exactly, because any child that grows up in the public eye is automatically going to be privy to a different set of pitfalls and privileges than the average youngster. Or to put it another way, Dweezil, Moon Unit, and Apple Martin are not going to have the same concerns as your kids will, because Apple Martin can fan away her critics with a stack of $100 bills. While you might hate-read Gwyneth Paltrow’s blog, actually following her lifestyle is unsustainable, especially for your child (who is one ill-placed “I” away from being a beverage).

Moreover, naming your child Nutella isn’t even creative and is, in fact, kind of cruel. No matter how much you love Nutella, using the spread as a name is not only an infringement on the company’s brand, it’s showy and self-aware. It feels like an inside joke, meant to be enjoyed by the perpetrators as commentary on how funny and hip they are, rather than a legitimate distinction that the person they created will have to go on and live with for the rest of their lives. It shows a blatant disregard for the future of the child, who’s been forced to suffer through being a walking joke before they can even crawl. It’s comical, yes, in an absurd way, but it’s not actually that funny when you think about what Nutella’s life will actually be like.

Free speech has its limits, especially if a child’s welfare is involved.

While it seems like Nutella’s parents should be entitled to name their child whatever they want, free speech has its limits, especially if a child’s welfare is involved. It’s unfortunate that the law had to get involved at all, but when the very nature of one’s personhood is at stake, is there a line that has to be drawn?

Legally, this is all kind of a grey area. But as a primer, Forbes‘ Richard A. Epstein breaks it down thusly:

Analytically, names have two distinct functions. The first is to designate one individual to the exclusion of all others, for which a nine-digit social security number will do just fine. But many names carry an expressive content, as by naming a daughter Chastity or a son Jesus. In most cases, the right response is for others to use the name even if they do not like the message it conveys.

Yet there are fuzzy limits. A name enjoys a peculiar monopoly status. … Who wants to be polite to an Adolf Hitler? … The long-standing law of abuse or neglect thus has unappreciated virtues in this context.

Yet the objection to the unlimited use of these names cuts deeper. Today, no adult could voluntarily take the name Adolf Hitler either. This basic point is explicitly recognized under modern trademark law, which explicitly forbids any person from registering a trademark that consists of ‘immoral or scandalous matter.’ … Exactly how far this trademark prohibition runs is an open question. Washington residents will be well aware of the continuing, if unavailing, 16-year struggle on the part of American Indians to set aside the Washington Redskins trademark as racially offensive and therefore conveying ‘immoral or scandalous matter.’

The predicaments Epstein discusses above manifested in the news circa 2009, when the New York Times‘ Lisa W. Foderaro reported a story on a man named Heath Campbell, who decided to call his son Adolf Hitler. Foderaro’s article reveals that Campbell supposedly talked about naming one of his children Satan years before, and that he eventually did name his two daughters “Honszlynn Hinler Jeannie Campbell” (after Heinrich Himmler) and “JoyceLynn Aryan Nation Campbell.” She also goes on to detail how Campbell’s children were eventually removed from their parents’ custody, though according to Foderaro, “the state would not remove a child based on a name.”

However, Foderaro also notes that when the story about Campbell went viral (the whole incident began after a local ShopRite wouldn’t put his son’s name on a birthday cake), there were many who “wrote to say that, to their mind, the simple act of naming children after Hitler and Himmler constituted abuse.” Oddly enough, though, she also mentions that Campbell’s comments on the whole thing were almost blissfully unaware. He admitted that the Nazis “were bad people back then,” while also claiming that “they’re just names, you know.” Campbell further told the Times, “My kids are little. They’re not going to grow up like that. … My son is going to learn to love. None of my kids are going to have a bone of hate in their body.”

The crazy thing that Campbell doesn’t appear to get here is that whether his kids are going to have a bone of hate in their body or not, they could potentially become subjects of hatred themselves based on their inherently offensive names. According to Rutgers Law professor Laura Cohen, whose field is juvenile rights, “looking ahead, you could imagine the state making an argument that the ShopRite rejection is a precursor of things to come.” Cohen explains that the state’s concern is that such children are “subject to lifelong ridicule and harassment,” but the reality is more complicated. Cohen told Foderaro, “The question of what you name your kids goes right to the heart of the zone of privacy around the parent-child relationship.”

“Nutella” is definitely better than being named after a venereal disease or Hitler.

While a parent-child relationship should be a sacred thing, as well as appropriately private, there is also an easy question of common sense here. Nutella might seem like a cute name now, and it’s definitely better than being named after a venereal disease or Hitler. But what about when Nutella has to apply for colleges, go on job interviews, or show up for the first day at school? Statistics indicate that as many as 77 percent of all children in America have been the subject of bullying at one time or another. Meanwhile a Unicef investigation found that in France that around 17 percent of student had experienced in-school violence, while another 18 percent had been sexually harassed and 16 percent “had been given a demeaning nickname.” With a name like Nutella, you’re just giving bullies a gift, one wrapped in hazelnut.

Good parents, or just parents who aren’t stupid enough to name their children something like “Hitler,” should always think these situations through before taking a name into consideration. Kids are mean, and assuming they will neglect their worst instincts and be kind to someone who is different is simply foolish. It’s certainly possible that little Nutella would’ve chosen to own her strange signature, regardless of what others said about it, but it’s just as possible she would’ve been picked on and bullied over it so much that the psychological anguish she suffered would’ve stayed with her throughout her whole life.

Giving your child a name which will purposefully put a target on their back isn’t merely stupid, it’s terrible parenting.

There’s no reason that you can’t give your baby a more unique name than Bob, or Jane, or Tom, or Mary (not that there’s anything wrong with those names either). But giving your child a name which will purposefully put a target on their back isn’t merely stupid, it’s terrible parenting. Every parent wants their child to be special, but just naming your kid after The Hunger Games or Game of Thrones won’t accomplish that alone. We all also have certain joys in our life that we want to pass on to our children, whether that’s a favorite movie or a favorite hazelnut spread. But please, parents of the world: Before you name, don’t just think of the children—think of your children, and maybe reconsider before you put Starlord down on that birth certificate.