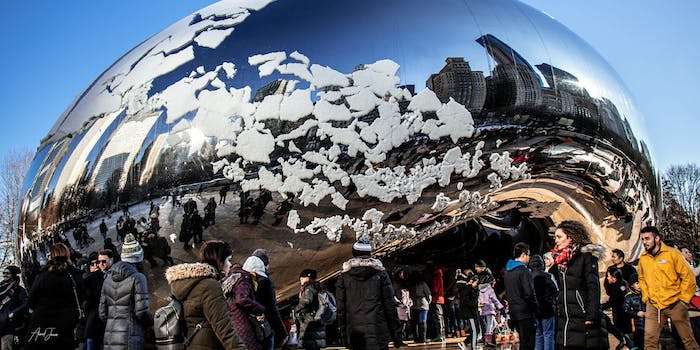 Frozen doorknobs? No thanks!

Chicago has an average January low temperature of 21 degrees Fahrenheit. It’s already been as low as  -23 degrees today, making it more than 40 degrees colder than usual in the Windy City. Speaking of, with windchill we’re talking about the possibility of weather that feels like -50. Even for tough Chicagoans, that’s crazy cold. In fact, it’s the coldest the city has been since 1985 when it was a bone-chilling -27 degrees.

So how are Chicago residents dealing with the big freeze? With shock, ingenuity, and a fair amount of humor.

They’re calling the city “Chiberia” right now, a portmanteau of Chicago and Siberia. That phrase was first coined during the cold snap of 2014, although it’s worth noting it’s much colder this time around.

A quick search for #chiberia on social media turns up some amazing photographs and videos that will make you shiver just looking at them.

Look at this amazing #sunrise over #lakeMichican and the #Chicago skyline on a historically cold day. #Chiberia #Chicagoweather #PolarVortex @accuweather @breakingweather pic.twitter.com/1LE1OrUUCI

Obviously, people are staying indoors as much as possible, but when they do go out they’re bundling up like they’re going to explore the South Pole (where, by the way, it is currently warmer than it is in Chicago).

Boys still need to go outside, -19*, feels like -51* (also posting so it shows up for years to come in Timehop to remember this frigid, frigid day)

And that includes residents who were born with fur coats.

Sure staying indoors seems like a great solution, but even that isn’t foolproof. Tons of people have posted about the icy conditions inside their homes.

Be sure to clean the ice off your car windows and the INSIDE OF YOUR HOME WINDOWS too. #chiberia #chiberia2019 #chicago #polarvortex #polarvortex2019

Reason #135 why the midwest sucks… There is ICE IN MY HOME! #PolarVortex #Chiberia #LiveActionFrozen

Wanna know how cold it is in #CHICAGO? Check out the ice on the INSIDE of my windows this morning! #PolarVortex STAY WARM! pic.twitter.com/nxjZTdK5l6

In fact, it’s gotten so cold that Chicago authorities have purposefully set fire to train tracks in order to keep them from contracting.

But some people are braving the weather just to have a little fun. It seems that everyone wants a chance to throw some boiling water into the air and watch it turn to snow.

Throwing a cup of boiling water in the air, when it’s minus 27 degrees (celsius). #chicago #PolarVortex2019 pic.twitter.com/fgRZHnwVvo

Someone even created an official Chiberian flag.

Luckily, the cold snap won’t be sticking around for too long. Friday’s high in Chicago will be a balmy 22 degrees above zero and by Saturday it will get up to 40 degrees. Way better than actual Siberia, where it will be around -35 before you factor in the windchill.