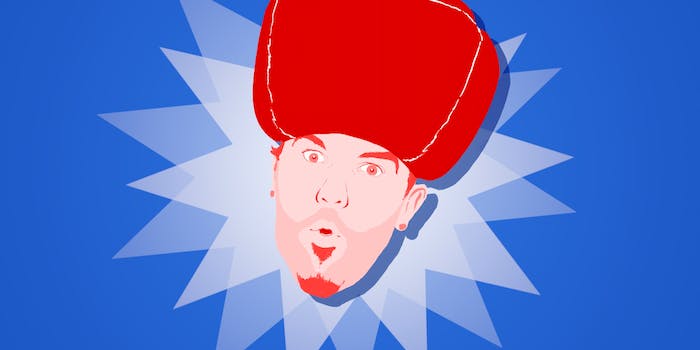 It's just one of those days where you don't want to wake up without a Russian passport.

Fred Durst already wears many hats, but his next one may be a Russian ushanka.

The film director and Limp Bizkit frontman revealed yesterday in a radio interview on Moscow’s ROCK FM that he’d like to become a Russian citizen. Durst used the airwaves to reach out to anyone who might be able to set him up with the elusive citizenship.

“I really want to get a Russian passport! Moreover, I want to buy a house here,” Durst said. “This is a very complicated process. So if anyone has acquaintances who could help, please call!”

Durst already has a personal history with the Russian Federation. In 2013 he hosted a show at the same Moscow radio station where he revealed these wishes for a passport («???????»).

“I have a serious feeling [for] the country, its history and traditions. For me, it is extremely special. I [can’t even] explain it,” he said.

If successful in obtaining citizenship, Durst will join an extremely small crew of unlikely “adopted” Russian citizens, including French actor Gerard Depardieu. American boxer Roy Jones Jr. is not yet a citizen but has personal assurances of receiving a Russian passport from none other than Vladimir Putin himself.

Limp Bizkit kicks off a one-month tour through the Russian Federation on October 25. Perhaps Durst will visit some real estate agents along the way.