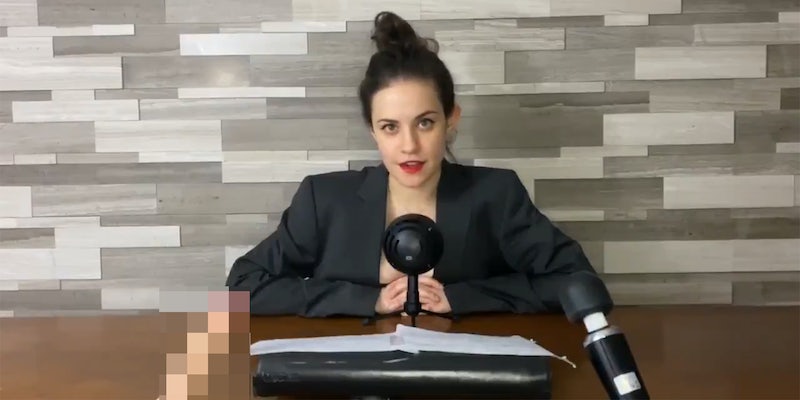 Fort Bragg, one of the largest military installations in the world located in North Carolina, was believed to have been the target of a security breach this week when its official Twitter account appeared to have been “hacked.” But it turned out to be a civilian employee who was mistakenly logged into the account while sliding into the replies of an OnlyFans sex worker.

The incident occurred in a week that was dominated by headlines of men being horny on main. First, New Yorker legal analyst and reporter Jeffrey Toobin was caught literally with his pants down during a Zoom meeting. (He since been suspended from his job.) Next, President Donald Trump’s personal lawyer Rudy Giuliani was caught accompanying an actress posing as a 15-year-old girl to a hotel room, where he promptly laid down on the bed and started rooting around in the crotch of his pants. (He later claimed he was simply “tucking in his shirt” and is still ostensibly employed by the president.)

In the instance of the Fort Bragg incident, the account inexplicably began sending thirsty replies to OnlyFans creator Quinn Finite on Wednesday. The replies were quickly screenshotted and began circulating on Twitter before the account was temporarily deactivated.

Fort Bragg Garrison Commander Army Col. Scott Pence found in an inquiry that three people had access to the account, according to The Washington Post. Those three were eventually ruled out, but the following day a civilian employee came forward and admitted that he had done the dirty tweets—with the mistaken belief that he was tweeting from his own personal account.

Before the Fort Bragg Scandal even broke, Twitter users Cody Johnson and Ben Mekler began speculating when the other dick—er, shoe was gonna drop.

For her part, OnlyFans’ Quinn Finite has had a surprisingly good sense of humor about the whole thing—as you can see from her tweets and video updates since the scandal broke.

She even conducted a fake “press conference” to address the subject. “PR damage control: tits and bush take the fall,” she quipped. “Real talk someone shouldn’t have lost their job over this—I’m sorry for any harm done.”

Though the joke may be played out, we’re pretty sure that nobody had “sex worker takes down the Fort Bragg special operations base” on their 2020 bingo card.