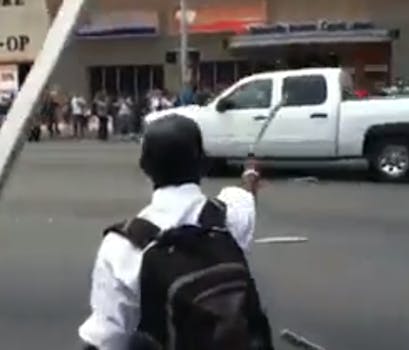 Nick Engmann became an overnight Internet sensation when he was hit by a bus during a University of Texas at Austin tradition called "Foam Sword Friday."

Last May, Nick Engmann, then a freshman at the University of Texas at Austin, became an overnight Internet celebrity when he was hit by a bus during a campus tradition called “Foam Sword Friday.”

At the end of each semester, UT students line up on opposite ends of Guadalupe Street and charge at each other, foam weaponry at hand. Usually they look out for traffic.

Engmann, donning a Barack Obama mask, amazingly walked away from the accident largely unscathed. The video, which you can watch below, has amassed over 3 million views on YouTube and made an appearance on Tosh.0. It even inspired a Frogger-like flash video game.

Unfortunately, due to said Internet fame, the Undergraduate Architecture Student Council, the organization behind the biannual event, voted to not hold “Foam Sword Friday” at the end of the 2012 Fall semester until the event can be made safer.

Despite this setback, a group of students led by none other than Engmann himself have taken it upon themselves to keep the tradition alive. Engmann and his cohorts created “FREE FOAM SWORDS! ON A FRIDAY!” on Facebook, an event set for Friday, Dec. 7, the last days of classes for the fall semester.

“Unfortunately the Architechural School has decided that they won’t be holding Foam Sword Friday this semester,” wrote the indestructible Engmann (sics all around) on the event page. “This is a serious loss both to the 7 year striding tradiation and to myself as a student here at UT, and i hate to see such a fun and strong tradition come to a temporary stop due to myself and the situation regarding last Springs event.”

To make things easier for those who want to participate, Engman & Co. will provide close to 100 foam swords to attendees.

Engmann’s fellow students are rallying behind him.

“Nick the Brave leads the charge even after his defeat last year,” wrote Liam Kelly. “ALL HAIL KING NICK!”

If the Facebook event page is any indication, the Fall 2012 edition of “Foam Sword Friday” will most definitely happen. As of this writing, more than 500 students have noted that they will be attending.