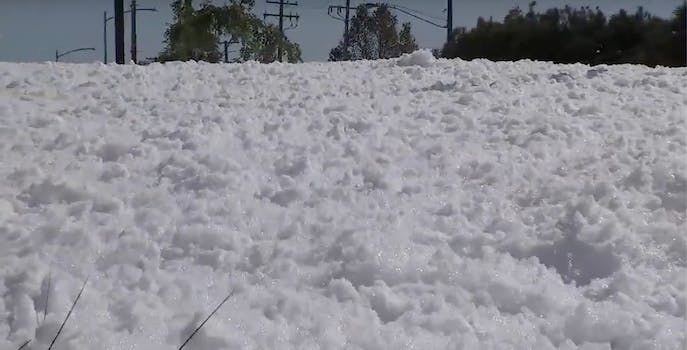 An unidentified mass of white foam flowed over an entire street in Santa Clara, California, Friday, reaching 10 feet and entirely submerging cars. Police on the scene didn’t know what caused the foam eruption, but some guy definitely rode his bike through it. The internet looked on, bemused, via Facebook Live, as the blob continued to grow.

police have still not shot white foam and are trying to get it to surrender peacefully https://t.co/Ug1V9fKQsn

The man who rode his bike through the mess told local Fox station KTVU that police on the scene had encouraged him to go for it. He found the foam was too deep to stand in, and also managed to ride into a sign hidden beneath the frothy substance. He said it felt like soap.

Afterward, police blocked the area to keep anyone else from embracing the foam.

Guy just rode his bike through the foam. Now police are blocking it off to prevent copycats. pic.twitter.com/QF0ubBFXUp

KTVU reported that the white substance appeared to be some kind of fire retardant, and may have leaked from a building on Martin Avenue during a test of fire systems. Apparently, the fire systems work.

But what does the foam mean? Is it a sign of a rapidly dissolving reality that no longer makes sense?

the simulation began to dissolve around the edges, beginning with The Foam https://t.co/9SOfp6RWhz

Or is it beautiful, the way trash floating on the wind is beautiful?

Opinions seem to differ on whether letting an unknown white foam blob swallow your entire body is bad or is, in fact, extremely good. I’d say it appears to be a tossup at this point.

Update 4:24pm CT, Nov. 18: Welp, looks like the foam is a carcinogenic fire retardant. A malfunction inside a hangar at the San Jose airport is the culprit. Signature Flight Support owns the hangar, which is brand spankin’ new and now flooded with skin-irritating foam.