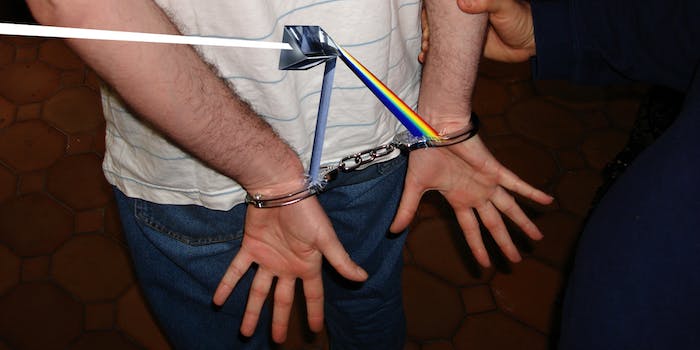 Can the NSA's recently revealed phone surveillance program prove that this man didn't hold up an armored truck?

A Florida man charged with holding up armored trucks hopes the National Security Agency’s (NSA) mysterious spying program, PRISM, will keep him out of jail.

Terrance Brown, 40, has pleaded not guilty to conspiring “to hold up armored trucks making cash deliveries to banks in Miramar and Lighthouse Point in 2010,” the Sun-Sentinel reported.

While the FBI has had no luck in trying to obtain Brown’s MetroPCS phone records from 2010 to prove he was near the robberies, Brown’s lawyer Marshall Dore Louis hopes that NSA phone records will prove otherwise.

“The president of the United States has recognized this program has been ongoing since 2006 … to gather the phone numbers [and related information] of everybody including my client in 2010,” Louis said in court Wednesday, according to the Sun-Sentinel.

Louis is referring to the NSA’s widespread collection of phone records, including location information, authorized under the Foreign Intelligence Surveillance Act (FISA). Verizon is the only carrier confirmed as participating thus far, but it’s believed that other U.S. carriers have also been ordered to share information with intelligence agencies.

The surveillance operation was exposed about a week ago by NSA security contractor Edward Snowden, who also revealed details of the agency’s Internet surveillance program, PRISM.

“The NSA has built an infrastructure that allows it to intercept almost everything,” Snowden told the Guardian. “With this capability, the vast majority of human communications are automatically ingested without targeting. If I wanted to see your emails or your wife’s phone, all I have to do is use intercepts. I can get your emails, passwords, phone records, credit cards.”

Snowden has been hiding in Hong Kong to avoid extradition to the U.S. He has not been charged with any crimes.

At this time it is unclear whether the NSA will comply with Louis’s request for phone records from July 2010, which is when the robberies occurred. The following is a court order from District Judge Robin Rosenbaum ordering the government to comply with Louis’s request for the phone records. The government was asked to respond to the court order Wednesday.

Prosecutors say the records are irrelevant, because Brown didn’t own a cellphone at the time of the robbery. Brown’s wife testified that he was using two phones, including one borrowed from her, at the time.