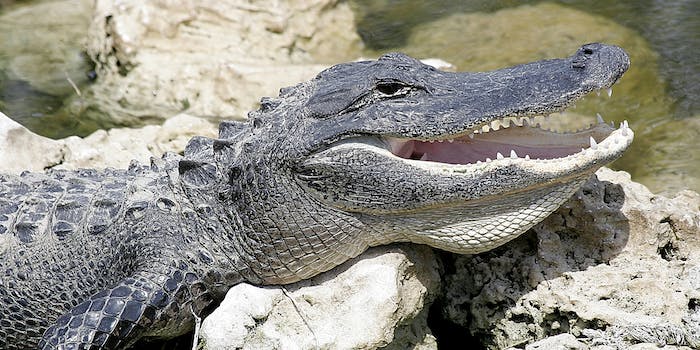 In a video posted to the Only in Duval Instagram account, the man can be seen entering the store with the gator. “Hey man, y’all got beer still?” he asks a store employee, presumably. “Y’all ain’t out, are ya?”

As he sees another customer headed towards the walk-in beer refrigerator, the man yells, “Is he taking the last bit of beer?” before chasing him through the store and taking the gator in with him to grab a 12 pack. Laughing and giggling from other patrons can be heard throughout the video like this is the most normal thing in the world.

Later, reporters caught up with Stratton at the same convenience store, which he seems to frequent. However, he claimed he had no recollection of the previous evening’s events.

“This store sells some good liquor,” he told Action News Jax. “I drank a lot of it that night.”

When asked where the gator came from, Stratton told the reporter that he had no clue. “I literally came to the store, and he was in the back of the truck,” he claimed. “It was stupid, and I’ll be facing some charges here soon. Probably go to jail, probably not, we’ll see.”

Video of the incident and subsequent interview has since gone viral because there’s nothing Twitter loves more than a Florida man.

You know I keep that mf thang on me. https://t.co/yj0BNoiXq2

Later, another video surfaced of Stratton with the gator and some friends before the incident took place, which to be fair, doesn’t exactly contradict what he told reporters since alcohol was already a factor.

The Florida Fish and Wildlife Conservation Commission is currently investigating the incident and Stratton could face a fine of $5,000 or up to five years in prison if convicted. We’d like to say he’ll probably think twice next time he takes an alligator on a beer run but we all know that’s not true.