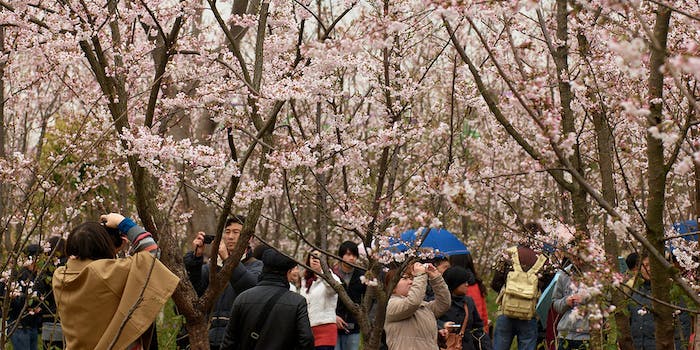 We're photographing everything now, building this amazing body of work, but we're getting less and less out of it.

Last weekend I planned to attend the Cherry Blossom Festival at the Brooklyn Botanic Garden. So around noon, I checked Flickr for photos of the festival. I wanted to see the weather, the crowd size, and who was at the annual celebration of Japanese culture. But I couldn’t find any photos. I headed off this festival prepared only with a normal weather report and a sense of adventure.

And now I sound like the guy in Louis C.K.’s “everything is amazing and nobody’s happy” routine, right? Give the photos a minute to come back from space? But listen, I knew, three hours into the festival, there were hundreds of photos somewhere on the Internet, because there are always hundreds of photos of the Cherry Blossom Festival. Everywhere, people are photographing themselves, their friends, the plants, people in costume. When I was there, no one could go five minutes without snapping a pic. 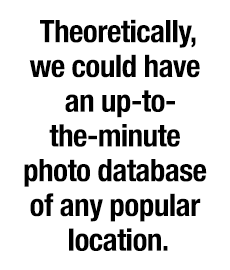 By the end of the day, dozens of photos from the festival were on Flickr. But they took hours to get there. That’s because most Flickr photos come from traditional, non-Internet-connected cameras. You have to go home, or at least sit with a laptop, to upload those. So when I checked halfway through the festival, nothing had shown up.

People had already uploaded hundreds of photos, of course—it’s just not easy to tell where. Instagram has no search function (the app only searches by user and hashtag), and third-party Instagram search engines are broken and incomplete.

Theoretically, we could have an up-to-the-minute photo database of any popular location. We’d just need Instagram to include more metadata by default and allow users to sort by location (or let a third-party app do the same).

If we were properly organizing the photos we’re already putting online, I could see how a festival was going, and Google Maps could show me all the photos taken from the Eiffel Tower in the last five minutes. I could even see if a popular bar is crowded without any official system. We’d be able to see the world right now, as clearly as we see its past on Google Street View, as quickly as news spreads on Twitter.

We have the data and the technological infrastructure, but we’re stuck because no developer can access all the data.

If anyone was going to deliver these capabilities, it would be Flickr. In 2006, it was the canonical destination for photos. If you wanted to see photos of a certain place or subject, that’s where you went. But Facebook replaced Flickr as a social network, killing it on the desktop, and Instagram released a simpler mobile app, killing it there too. That would have been fine if Facebook and Instagram kept their photos data-rich and fully exportable. But both services give fewer tagging, grouping, and other sorting options, and they built their photos into incompatible databases. Facebook won’t organize photos any way but by human subject or uploader. Instagram has just a few view options and focuses solely on the friend-feed.

We’re photographing everything now, building this amazing body of work, but we’re getting less and less out of it.

We do get some benefits from not having one monopoly in charge of photo sharing: Instagram did mobile better than Flickr, Facebook can link a photo of someone to their whole social profile, and Foursquare efficiently arranges photos by location. These advantages, however, have replaced Creative Commons licensing, advanced search, and any other tool that relies on treating the world’s photo pool as a mass data set rather than a series of individualized feeds. 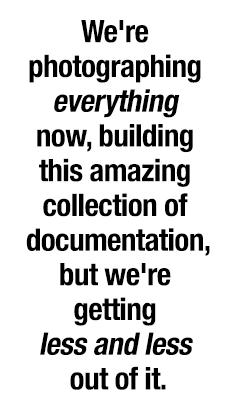 Twitter, Tumblr, and Imgur siphon off bits of the photo market without giving them back into the mass set. Meanwhile, any photo service that dies off (RIP Picasa, Zooomr, Photobucket) becomes a graveyard for photos that will probably never get moved to a new service.

Why are we giving up this magical ability to basically explore our world in real-time? The bandwidth is lower than streaming video; the new-data-point frequency is lower than Twitter; the location sorting is less complicated than Google Maps or Foursquare. But no one service has an incentive to build this tool, or to open up its database for a third party. Instead they only innovate ways to steal market share from each other. Flickr recently downgraded its mobile app, removing discovery options and cropping photos into squares. The new app is an obvious Instagram imitation, but it won’t help Flickr recapture the market. If any photo service beats Instagram, it won’t be by making data more open.

Our collective photo pool suffers from a tragedy of the commons, where each service snaps up our photos with as few features as it can, or by removing features. (Snapchat, for example, actively prevents photos from joining the pool by replacing the subscription model with a one-to-one model, efficiently delivering photos straight from my camera to your feed.) We are giving our photos to these inferior services, they are making billions of dollars from them, and what we’re getting back is pathetic.

The best agnostic tool we have is the archaic Google Image Search, which doesn’t effectively sort results, doesn’t distinguish between image sources, and doesn’t even touch location search. The lack of agnostic metadata is keeping us in the past. As Anil Dash pointed out in 2012, the photo pool (like blogs and status updates) is becoming fragmented and de-standardized. Everything we’re putting online is chopped up by services that don’t play well together, and that’s bad for the user. 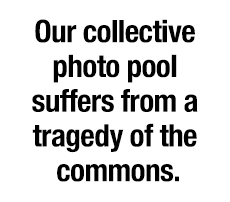 Dash wrote, “We’ll fix these things; I don’t worry about that.” I do. I don’t think technology has to work out right. We can build expressways where we should have built bullet trains. We can let an ISP monopoly keep us at laughable broadband speeds. We can all dump our memories into the wrong sites and watch them disappear in 10 years. We can share postage-stamp-sized photos on machines capable of streaming 1080p video.

Even if we do fix this, it will not be retroactive. There are stories about whole TV series lost to time because the network stupidly trashed the original reels. Now that we take more photos than we know what to deal with, we won’t lose our originals—we’ll just lose the organization. When Facebook and Instagram are inevitably replaced, we’ll be left without the context, without the comments, without anything but a privately stored pile of raw images named DCIM_2518.JPG.

Just a heap of bullshit, really.

Note: This story has been updated for clarity.