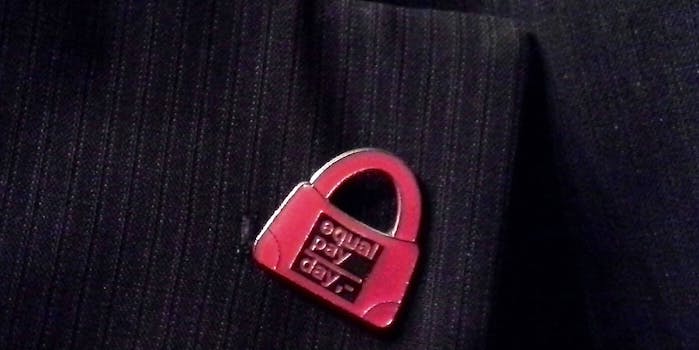 Get the conversation started.

Tuesday is April 14, or “Equal Pay Day,” a reminder of just how tangibly unequal things still are for women in the workplace. By now, after years of work on the part of activists, politicians, and women sharing their stories with the world, you’re probably aware of the dilemma—the pay gap between men and women employees, popularly cited at 77 cents to every man’s earned dollar. That’s why Equal Pay Day falls on April 14, incidentally—because it’s meant to be the day when women have finally received equivalent earnings to a man rolled-over from the prior year.

Of course, that figure’s been widely disputed, with critics asserting that the gap is far narrower when accounting for different career choices, for example, and far wider when accounting for women of color. But that’s no exoneration—it’s all well and good to argue about the extent of the gap, and how it’s popularly discussed, but it’s another thing to argue that it doesn’t exist at all, that poor women’s representation in certain fields has nothing whatsoever to do with sexism, or that any level of pay gap is somehow acceptable.

Because it’s not! Full stop. We should have equal pay in this country for equal work, regardless of sex or gender identity. It’s long overdue, and while good-faith people can argue about the appropriate extent of possible solutions, there’s really no argument about the need for awareness and action. Here are some examples of how you can help make a difference on Equal Pay Day!

Support a petition, or create one yourself

This is sort of the go-to form of simple online activism, no? Just stamp your digital signature on a petition like this one, and mention it on your social media accounts to get the ball rolling. Or hey, do the old-fashioned kind, like this one! Obviously, petitions have limited utility to really effect change, by virtue of a GOP-controlled Congress which is hostile to discussion of the pay gap, much less actually conceiving ways to fix it.

But it’s so quick and effortless, and however bleak things might seem, it really is valuable to have records here and there showing just how many people will put their name to a cause. So, make your voice heard wherever you can.

If you’re a woman, talk about your experiences with equal pay

Ever made less money than your male colleague, despite holding the same job? In spite of the fact that critics contest the precise extent of the pay gap, there are particular fields where it’s been demonstrated quite vividly—woman doctors, for example, make shamefully less than their male counterparts.

Basically, if you have personal experience in these areas, and you know of some ill-informed men in your life, it could help to bring it up. Of course, it could also just prove irritating as hell—I’ve witnessed more than enough “mansplainings” for one lifetime—but there’s no easy road forward. Maybe you could attend an event (like this one) on equal pay with somebody close to you? Or maybe you’d rather keep it casual — just sit around and talk.

If you’re a man, talk about equal pay with other men

Like it or not, and I don’t, but it often feels like men are more easily swayed or influenced by the opinions of men than women. I personally think this is caused by implicitly sexist assumptions about women being overly aggrieved and self-interested—charges that frequently arise whenever a historically oppressed group calls out a societal ills.

But with such a heavy undertaking, I’d argue that getting the message out is the first step, whoever the messenger. There’s no doubt that there are some men out there who’d probably bristle and get defensive if a woman he knew started talking about the pay gap, but it might give his bro-tastic buddy a little more room to navigate. It sucks, sure—why not respect women enough to really listen to them?—but at the same time, it demands sympathetic-minded men to put themselves on the line too, and that’s a good thing. Solidarity, as always, is key.

So if you’re already informed about these issues, go out there and make your feelings known. If you’re not, however, be sure to get familiar with the facts first. After all, as the debate to this point has shown, imprecision is an easy out for people who want to act like there’s no problem at all.

I’m sorry, but hey, you can’t say this isn’t a political issue. As I mentioned earlier, there’s really one thing standing in the way of any sincere effort to pass new equal pay or workplace protections: the Republican Party.

As Think Progress detailed, the party made a limp attempt at talking the talk late last year—the RNC insisted back in September that “all Republicans support equal pay,” just a week before unanimously blocking the Paycheck Fairness Act.

Oppose pay secrecy in the workplace

Have you ever had a job that forbade you from discussing your earnings with your coworkers? This is pay secrecy, a classic (and often illegal) practice some businesses employ to keep workers from measuring their rates of pay against one another. It’s not just a system used against women, to be clear—it’s also a hallmark dispute between unions and industry.

This was a component of the Paycheck Fairness Act that the GOP blocked, and as an entry-way argument, it might not be a bad starter. So if you’ve got any men (or even women in your life who just aren’t moved by talk of equal pay), why not try to narrow the focus to this issue? “We should end pay secrecy in America, because why shouldn’t friends and colleagues be able to talk freely about their lives and careers?”

It may seem like a half-measure, I grant you. But at this point, what’s needed is a broad political coalition, and looking at general anti-labor practices that make equal pay harder to achieve could be a good way to start the conversation.