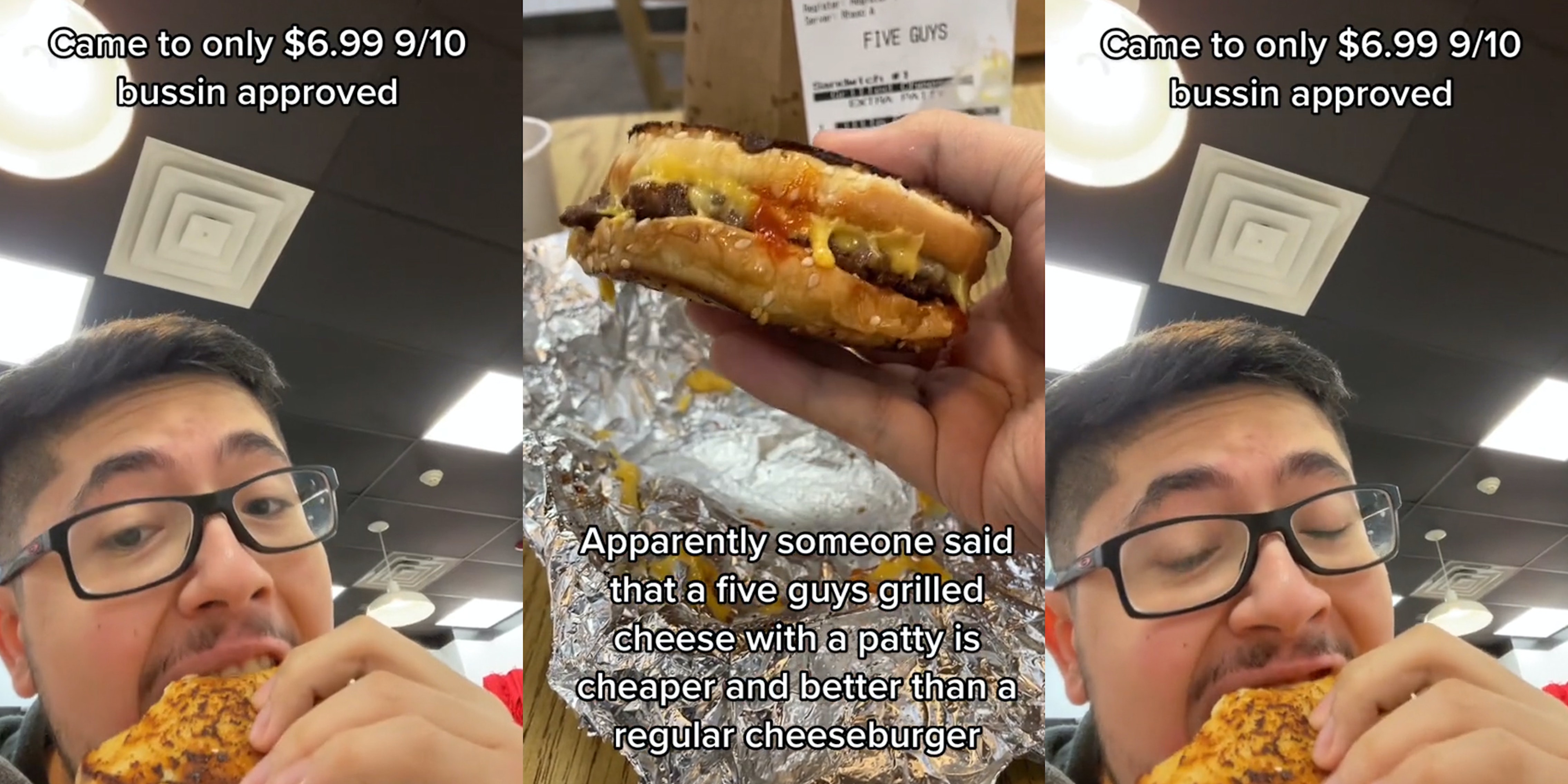 ‘Now that you’ve told everyone, they will raise the prices’: Five Guys customer lauds the cost of the ‘grilled cheese cheeseburger,’ sparking debate

'People in the comments obviously have never been to Five Guys if they think $7 is expensive.'

Many believe Five Guys is one of the most expensive fast-food establishments one can eat from. With the cost of a “little burger”—one of the chain’s most affordable burger options—coming out to a little over $8 and the bacon cheeseburger—the chain’s most expensive burger option—coming out to nearly $13 without any additives at one Los Angeles location, they might just be right.

One TikToker’s comments section is lamenting this after he made a video lauding the cost of the “grilled cheese cheeseburger.” This order has become a “hack” on TikTok, with several TikTokers—and workers—going viral for their videos on it. A customer can order the grilled cheese cheeseburger by ordering a grilled cheese for roughly $6.50 and adding a patty to it for about $2.50 more. We’re using the same Los Angeles location for reference, but the prices are all dependent on the location. In this TikToker’s case, he says his total came out to $7.

The TikToker, @hasaneats, who boasts more than 90,000 followers, recorded himself unwrapping his order of the grilled cheese cheeseburger while sitting inside a Five Guys location. “Apparently someone said that a five guys grilled cheese with a patty is cheaper and better than a regular cheeseburger,” the text overlay on his video reads. He gives the burger a nine out of 10.

@hasaneats also ordered the cajun fries, which he rated a 10 out of 10 and lauded them for always being “bussin'” and coming overfilled. A former Five Guys worker, however, once told  Pop Sugar that customers get what they pay for when it comes to the chain’s fries, referring to them as an “illusion” so that customers think they are getting a good deal with an “extra” helping of fries.

The video amassed over 330,000 views as of Thursday, and people mocked the TikToker for praising the cost of the order. But others shot the critics down, arguing people should expect to pay a pretty penny when they go to Five Guys.

“People in the comments obviously have never been to Five Guys if they think $7 is expensive,” one said.

Others speculated that because customers save a few cents by ordering the burger this way, Five Guys may change the price of it.

“Now that you’ve told everyone they will raise the prices,” one joked.

“Hacks get exposed then the prices go up,” another echoed.