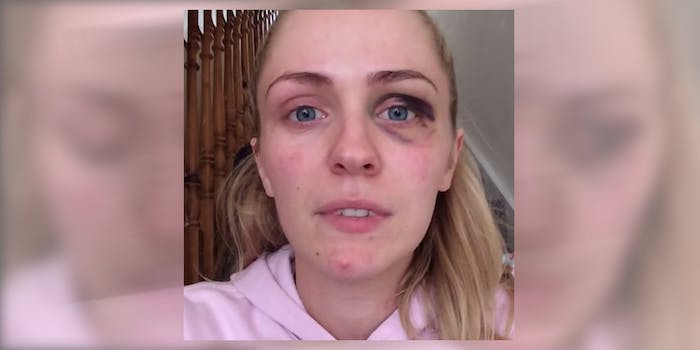 The Irish blogger took to Facebook with a black eye to encourage women to stand up for themselves.

Irish mother and fitness blogger Emma Murphy took to her Facebook page with a black eye and opened up about alleged domestic violence from her partner and the father of her children in a video that’s been viewed more than 6.4 million times in two days.

“It is not right to raise a hand to a woman, and it’s only now that I’ve realized that,” she says in the clip. “I’ve had the courage to walk away and go straight to my family and friends and people who love me.”

Murphy normally uses her Facebook page to post inspirational quotes and tips for “healthy mums.” She’s the mother of two young children, the older of which can be seen in the background of her video. The 26-year-old says in the video that her partner of three and a half years had been cheating on her, and when she confronted him about his latest dalliance, he allegedly punched her. She says this is not the first time he’s raised a hand to her over the years.

“I’ve been told I’m paranoid, I’m a psycho, I’m nuts, my insecurities will kill me one day,” she said.

The video’s comments section has exploded with responses, with the video being shared over 111,000 times, with 16,665 comments and counting.

Murphy finishes the video pleading for other women to not tolerate violence or abuse.

The former partner in question, Francis Usanga, a well-known Dublin fitness personality, gave his side of the story to The Irish Sun. While he acknowledges the altercation with Murphy, he says he pushed her and did not punch her.

“Yes I did push her,” he told the newspaper. “I pushed her, I didn’t punch her. It was just the force” of her subsequent fall.

“I know nobody will believe me but I am not a violent person. I never, ever want to hurt anyone,” he said. He also admitted to the cheating during his time with Murphy; another woman is expecting his third child this week.

The Daily Dot reached out to Murphy for additional comment and will update this story if she responds.