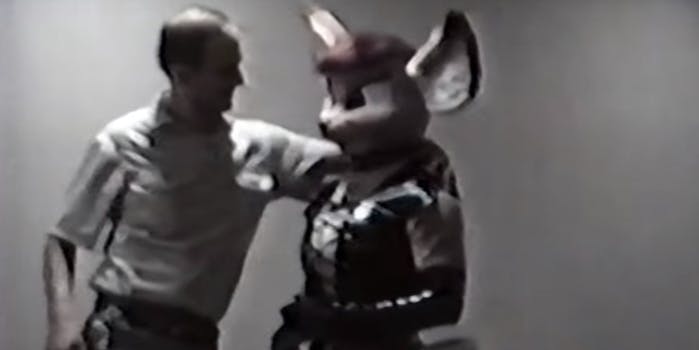 Furries have been meeting up for longer than you think.

Although we now live in an age where it’s accepted as normal that furries sexually harass Tony the Tiger on Twitter and constitute a viable marketing demo for Disney movies, the anthropomorphic animal cosplay fandom’s origins are rarely discussed. But now, at long last, we’ve been offered a glimpse into the scene’s early days.

Furries often arranged parties at larger fan conventions in the mid-1980s, and it wasn’t until the end of the decade that they splintered off to launch their own annual event, ConFurence, which ran for 14 years. According to WikiFur, ConFurence 0 was a “dry run” that took place in January 1989 at the Holiday Inn Bristol Plaza in Costa Mesa, California, with 65 furries attending (out of the 90 who RSVP’d).

You could try to imagine what it looked like, but why bother? Someone just uploaded the actual vintage footage.

Someone posted footage of the first furry convention on YouTube and it's like a terrifying sequel to Trash Humpers. https://t.co/PT59OuUncX

So kudos to Bob and everyone who partied their tail off at ConFurence 0. You’re an inspiration to wild creatures everywhere.