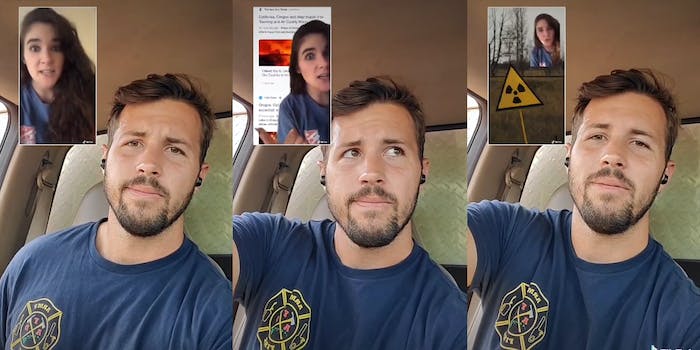 Wildfires have ravaged the West Coast in the last month, displacing thousands during a pandemic and taking an untold number of lives. But there are still people unloading conspiracy theories about the fires. One firefighter is using TikTok to stop the spread of misinformation.

As detailed in a Twitter thread from Fresno Bee reporter Cresencio Delgado Rodriguez, TikTok user wildlandmike responded to a video that wondered why the fires abruptly stop at the Canadian border (“It’s a U.S. database map,” he says of the visual being used) and why there are no stories about how they started, save for that disastrous gender reveal party (“Campfires, lightning strikes,” he calmly explains).

The video he’s responding to was removed, but the creator, cierra_mistt, has more than 2 million followers and is verified on TikTok. She’s posted other out-there theories about the Titanic, and people are calling her out for reposting a TikTok about shadowing a firefighter for a day, in which she gave “respect” to her “firefighting homies.” A commenter in the Twitter thread claimed she had previously pushed a George Floyd conspiracy theory.

Wildlandmike—real name Michael David Clark, according to his Instagram—debunked another video alleging that fires were set on purpose, which he claimed was footage of a “prescribed burn.” In a more recent one, he again addresses misinfo about the fires stopping at the U.S.-Canada border, which has also been addressed by a climate scientist.

In the wake of his virality, the Ryan Reynolds lookalike recently joined Twitter, where he’s now followed by… Ryan Reynolds.