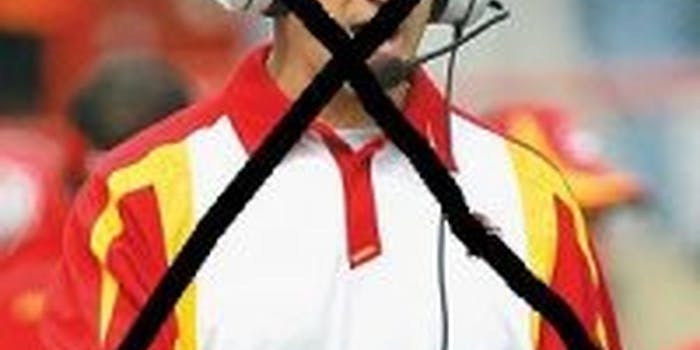 Why settle for merely swearing at the TV when your football team loses?Join the crowds and call for your coach to be canned! It's the true American sport.

Tired of simply watching or playing football this Thanksgiving? How about participating in one of America’s particularly ungrateful traditions: getting coaches fired.

Frustrated with your team’s performance? Plug your coach’s name into this formula—www.fire[Coach’sName].com—and there’s a good chance you’ll be welcomed by an even more bitter fan who anticipated your pain with a website.

Most prevalent in football, die-hard fans of every sport are doing it now. Even though baseball coach Mike Matheny’s first game isn’t until April 4, 2012, there’s already a website firemikematheny.com, dedicated to seeing him lose his job.

The practice dates back at least to the 2002 when a group of Florida football fans expressed their displeasure with fireronzook.com, now defunct.

Though Zook notched a winning record in 2002, that wasn’t good enough for his fan base. The site quickly became “a public relations problem,” an assistant athletic director at Florida told the New York Times. Zook was fired two years later.

Zook has since been rehired as head coach at Illinois, where he now enjoys criticism from a different blogger, an Illinois fan at fireronzook.wordpress.com.

The same season Fire Ron Zook went live, Tennessee fans set up firecoachfulmer.com. Considering Phillip Fulmer had coached Tennessee to an 11-2 record the previous season and a national championship three years before that, this set the precedent: Coaches were liable no matter how successful.

Of course, opportunists quickly took note, and soon most coaches’ fire sites were available for an inflated fee. In 2003, an enterprising Texan known only as Doug started a short-lived website called RedShirted.com (archived here), squatting dozens of fire-coach-X domain names, complete with a tiered pricing system and a heavy sales pitch: “What could be more American than the combination of Football and the First Amendment? At Redshirt Networks, you can exercise your right of free expression by securing the domain name that most affects your favorite football team.”

But you don’t have to lay down a lot of cash to launch your own site promoting your coach’s ouster.

For  every actual “Fire the Coach” site with a fan-purchased URL, there are scores of such sites that can be made for free. Particularly common are Facebook groups by frustrated fans: of the Buffalo Sabres (Fire Lindy Ruff), for instance, or college basketball at Indiana (Fire Tom Crean), South Carolina (Fire Darrin Horn), Missouri (Fire Frank Haith), Wake Forest (Fire Jeff Bzdelik), as well as practically every college football coach. This goes for the NFL, too. Even French soccer (Fire Raymond Domenech) gets the treatment.

And just as the annals of sports is littered with barely-remembered coaches who have since been cast aside, the Web is filled with discarded and half-formed sites devoted to hating them.

Take firejoepaterno.com, defunct since 2006, whose 2005 slogan was “Sometimes we stay longer than we should.” That has since taken on darker overtones. Sixteen Auburn football fans on Facebook are still members of the Fire Gene Chizik group, despite Chizik bringing home a national championship last year.

Like any meme, the coach-firing phenomenon has taken directions its originators couldn’t have imagined. Now anyone with a public job that draws scrutiny is liable.

The recently-founded firetherich.org, which doesn’t directly address Occupy Wall Street but uses sentiments that would be at home there, cites raising “awareness of the crisis of an eroding middle class” as one of its goals.

On the other end of the political spectrum is Fire Andrea Mitchell, launched to attack the NBC anchor for supposed liberal bias. It uses the tagline “Stop the leftist propaganda machine.”

Coupling political sentiment with opportunism to sell is Fire Barack Obama. While critical of the President, the site’s owner is clear that his purpose to make money—specifically, $36,000. “This price is subject to “change” (pun intended) according to the severity of other Obama actions before the 2012 election,” the site says.