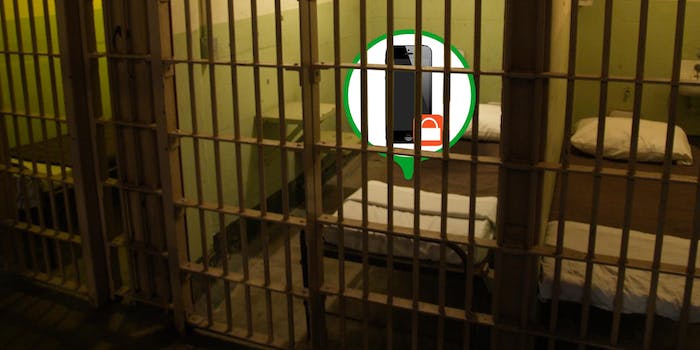 Teens these days, with their smartphones and their crime sprees.

A New York City teenager didn’t need his one phone call to tell his mom he’d been arrested—she found him at the police station using Find My iPhone.

The woman, who like the suspect has not been identified, wondered what had happened to her seventeen-year-old son after he failed to return home on Halloween night. When she started tracking her son’s iPhone on her own device, according to DNAinfo, she saw the Apple pushpin hovering over one of the worst possible places: the 103rd Precinct police station in the Jamaica neighborhood of Queens.

The young man and two of his friends were being held at the stationhouse on robbery charges. Officers believed that they snuck up on their victims, hit them in the head, and stole valuables like (ironically enough) cell phones.

The perp’s concerned parent didn’t know about any of this when the wave of local trick-or-treaters ebbed and her son still hadn’t arrived home. Apple’s location-tracking service told her where to go, so she headed for the station.

When Cappelmann spoke to the young man after his mother arrived, the teenager said, “I should have listened to her and I should have gone home.”

DNAinfo did not know if the no-doubt-embarrassed teen and his two acquaintances had been charged with any crimes. Regardless, let this be a lesson to all would-be miscreants: Before you break the law, check to make sure that your phone is turned off.