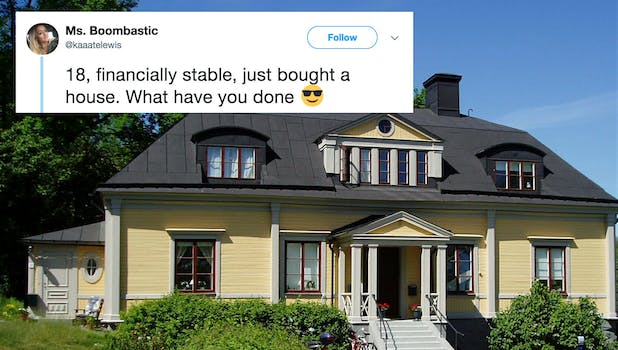 A woman referenced the ‘financially stable meme’—and Twitter freaked out

When the internet doesn't get your joke.

There’s a certain popular, self-congratulatory style of social media post where teens brag about financial success and homeownership, taunting their peers who are struggling under the Baby Boomer legacy of no jobs and high student debt. These posts are infuriating, and that’s what Kate Lewis was mocking when she posted this on Twitter:

18, financially stable, just bought a house. What have you done 😎 pic.twitter.com/7kIRLFiC5g

Unfortunately, no one got the joke.

Her post has thousands of comments, and nearly all are either attacking her over her privilege, accusing her of leaning on rich parents or sarcastically answering the “what have you done?” question. The knives are out for poor Kate.

i woke up before 12 on a Sunday https://t.co/FWnV5VwNhU

fs a Canny even afford chips n cheese after a night oot n cunts the same age as me are buying gaffs https://t.co/o6MDwYuzYs

People were so quick to criticize an 18-year-old’s apparent success that they didn’t stop to check whether she was joking. Either that, or they’d simply never seen the type of puffed-up rich kid post she was mocking. And there are many:

It’s a popular enough joke that there’s a Spongebob Squarepants meme about it:

Kate’s friends were in her mentions expressing disbelief that everyone missed the humor:

she probably thought JUST her friends would see it? i mean if i posted something like this my first thought wouldn’t be “oh this is going to go viral and i’m going to have a bunch of people mad at me in the comments”. i mean i’m sure she didn’t tweet this hoping for twitter fame

@kaaatelewis BITCH I PREDICTED THAT THIS EXACT THING WOULD HAPPEN AJVDKENWLDKLD LOOK AT ALL OF THE PEOPLE THINKING YOURE BEING SERIOUS IM DRY HEAVING https://t.co/KMxcF32jsy

And Kate is just kind of rolling with it, laughing at the absurdity of it all:

We returned the house & bought the Atlantic Ocean instead 👌 pic.twitter.com/hzpaEWfmxF

The reaction to her joke is wild to see, and it’s a perfect illustration of Twitter’s tendency to collapse context and leave only impotent anger in its place. A whole lot of people were very mad about something that wasn’t true and wouldn’t have affected them regardless. They saw a young, attractive, seemingly wealthy woman and lashed out at everything from her boyfriend’s shoes to the landscaping outside “her” house.

Maybe her critics thought they were “punching up” at a wealthy, privileged target—or maybe they didn’t think that hard about it. Many are quick to scrutinize the smallest detail of young women’s online lives, and the reaction to jokes on Twitter is skewed heavily in favor of men. Kate Lewis didn’t do anything to deserve the vitriolic reaction she received.

But even if her joke didn’t land the way she expected, she scored a genuinely viral tweet. And at a time when fame is no longer distinct from attention, that’s … something, anyway.