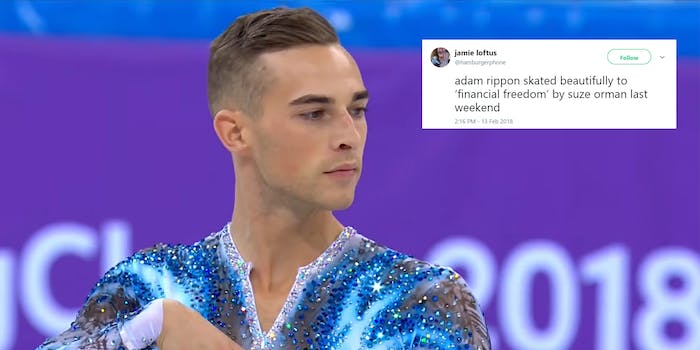 Olympic figure skating is even more majestic set to audiobooks

The beauty and power of a figure skater is an amazing sight to behold. That’s even truer when you’re talking about the best athletes in the world performing at the Olympic games. There’s only one thing that could make it better, and comedian Jamie Loftus figured what that was: their routines set to bad audiobooks.

Sure, Adam Rippon is an amazing skater, but his routine really comes alive when he performs it to Suze Orman reading from her self-help book Financial Freedom.

We all marveled when we saw Mirai Nagasu land a historic triple axel at this year’s games, but wouldn’t it have been even more impressive if she had landed it during a dramatic reading of Success for Dummies?

But Loftus didn’t stop at books.

What about Russian skater Evgenia Medvedeva performing to Alan Arkin’s 2007 Oscar acceptance speech for Little Miss Sunshine? A feat well worth the silver medal she won.

And how about Maia and Alex Shibutani ice dancing to an audio clip of British journalist David Frost interviewing a disgraced Richard Nixon in 1977?

Finally, it was no surprise that Canadians Tessa Virtue and Scott Moir took home the gold after skating to the opening of the Fatty Arbuckle episode of Mysteries & Scandals.

This kind of bizarre tomfoolery is common for Loftus, who once recorded a video where she pretended to receive a call from a panicked Haley Joel Osment who was being held hostage by his sex-crazed manager (a video that is probably NSFW).

Who knows how Loftus comes up with stuff, or why she choices to share it with us. Let’s just all count ourselves blessed and hope she keeps it coming.