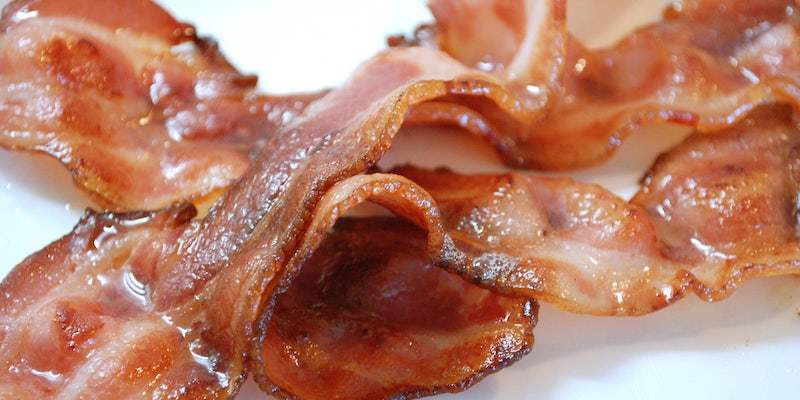 ’50 States of Bacon’ map shows you where in the U.S. people love bacon the most

We all love bacon, but which state is the biggest bacon fan?

Beef. Sausage. Chicken. These are all fine and delicious meats, but bacon occupies a very special place in the clogged arteries of America’s heart. Even if it increases our risk of cancer, we can’t keep away from the stuff.

So everyone loves bacon, but who loves it the most? Well, hot on the heels of Estately‘s map of which states like weed the most, the online and print catalog Ginny’s, which sells everything from toys to cookware, has created an interactive map showing which states like bacon the most.

Pick any state, either by clicking on it in the map or selecting it from the drop-down menu, and you’ll not only see how far above or below the national average it is for bacon-love-atude, but you’ll also get a bonus fact about bacon specific to that state.

Ginny’s Marketing Manager Cailey Pickett, explained the creation of the map and America’s love affair with the crispiest of all breakfast meats.

Daily Dot: What inspired you to create this map?

Pickett: We’re constantly working on new recipe ideas at Ginny’s and always try to keep up with the latest food trends to help inspire what we create. Instagram is one tool that we use to keep track of trending food topics, and after exploring the hashtag #bacon we thought it would be really neat to dive deeper into this data to see what stories we might be able to uncover.

We chose to utilize Instagram data for two reasons: first, Instagram’s API allows you to easily filter media around a specific location and also by the date. The other reason why we chose to leverage Instagram’s data was because we felt it is more focused on visuals than Facebook or Twitter, and that was key since we wanted to analyze image uploads.

Were you surprised by any of the results?

At first, I was surprised by the data. Then I realized that Omaha is a huge foodie destination (particularly for BBQ lovers), so it wasn’t very surprising to find Nebraska ranking at the top spot. What did surprise me, however, were some of the facts that we found for each state. I had no idea that a “United Church of Bacon” exists, or that bacon-wrapped popcorn is a thing!

Bacon, never considered the healthiest of foods to begin with, recently came under even more scrutiny, when the World Health Organization linked its consumption to an increased risk of cancer. Why do you think Americans continue to have such a love affair with a food that seems to be trying to kill them?

Bacon has been a huge culinary trend over the last five years, and the fact that it is such a versatile ingredient contributes to the popularity. We all know it is a go-to for breakfast, but bacon can also be added to all kinds of dishes, savory and sweet! Personally, when it comes to a healthy diet, I like to go by the whole “everything in moderation” viewpoint, so perhaps this is proof that other Americans have a similar mindset.

Any plans to expand the map to include other meats, or other countries?

We haven’t really thought about that, but I like the suggestion a lot. It would be interesting to maybe even filter according to bacon type, or to make a comparison between countries to determine which country has the biggest “social love affair” with bacon overall. Another neat modification would be to analyze data to showcase how a particular food trend gains or loses popularity over time. I think it is safe to say that bacon is a food trend that doesn’t seem to lose popularity, but what about the recent news around ice cream-stuffed doughnuts or the cronut fad that started in 2013? That data could uncover some very interesting stories!

As mentioned before, bacon being such a versatile ingredient makes it a grocery list staple for myself—you can mix it with vegetables, throw it in a soup or a sauce, and even use it as a delicious topping for brownies or any dessert, really. I also really like the fact that you can save bacon fat and use it when making pie crust or when frying up a batch of anything fried. Lastly, I love bacon because I can use it to make any recipe look a little bit more fancy. My favorite appetizer recipes are bacon-wrapped smokies and bacon-wrapped chicken bites, and they’re always crowd pleasers.

So how are we supposed to feel about bacon now? Well even the WHO study mentions that there are benefits to eating red meat, so Pickett might be onto something with her “everything in moderation” idea. In other words, have a few slices of bacon every now and then—but if you live in Nebraska, maybe sub in some tofu every once in awhile.