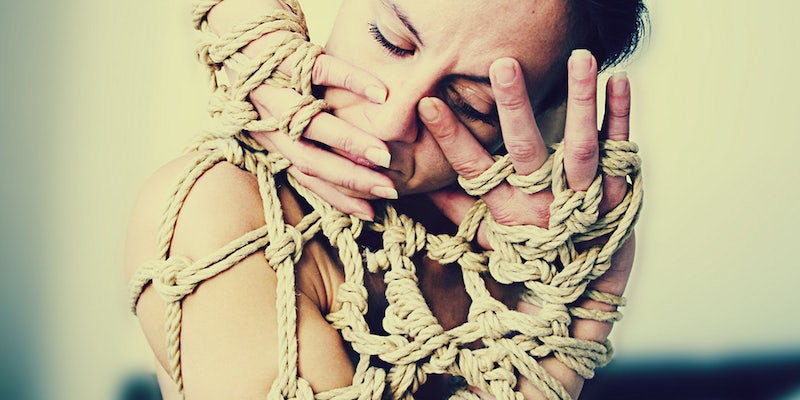 Consent culture is a huge aspect of BDSM—surrender is key to enjoyment, for many practitioners, and the excitement comes from the voluntary nature of that surrender. But you can’t feel safe enough to put yourself completely into the hands of a top without a careful discussion about needs, limitations, and concerns beforehand. That includes how far you want to take a scene and what both of you are expecting. An authoritative, decisive top might be appealing for some, but only after going over boundaries and discussing where scenes begin and end.

One of the most troubling aspects of Fifty Shades is the presentation of Christian Grey as a sad, broken man with a traumatizing past. That characterization speaks to the stereotype that kinky people are deviant or defective in some way, using kink to process past trauma. Kinky people are, in fact, as emotionally diverse as everyone else, running the gamut from emotionally balanced people with healthy, active lives to people with severe mental health conditions—and their sexuality has nothing to do with their past, present, or future.

Here’s why the vast majority of kinky people are kinky: It’s fun, for whatever value of fun the practitioner most endorses. A top of my acquaintance recently attended a predicament bondage workshop—because lots of kinky people go to classes to learn new techniques and talk about safety—and when the instructor asked why she had chosen to attend the class, she gleefully said “because torturing people is FUN!”

Whether you’re hitting people with riding crops, ordering boot blacks to scrub your shoes, tying people up, being humiliated by your top, or any number of other things, you do it because it’s fun. For everyone. If it’s not fun, you shouldn’t be doing it. For some, that even means laughing and joking through scenes.

6) Men and women alike can be doms, subs, or switches

When you see a group of kinky people in a room, don’t assume anyone’s identity—in fact, plenty of wealthy, powerful businessmen absolutely love being bossed around by petite women.

In Fifty Shades of Grey, Anastasia Steele’s relationship to Christian Grey isn’t just about somewhat abusive interactions and limited consent—don’t mistake “surrender” for blanket permission to do whatever a top demands. It’s also about being taken care of, but it’s only in a material sense. At the Los Angeles Times, Meghan Daum noted this aspect of their relationship, pointing out that the allure for many readers might not be the sex, but the money and power. “For every reference to handcuffs and inner goddesses,” she writes, “there are even more nods to Christian’s incalculable wealth.”

While some tops certainly do provide material support (just like partners in other kinds of relationships), they also provide specialized emotional support. Being in a dedicated scene can leave submissives in a floaty, comfortable emotional state sometimes referred to as “sub space,” but it can also require a slow, gentle comedown. In addition to monitoring the comfort of their submissives during scenes, tops provide aftercare, like snacks, drinks, affectionate physical touch, privacy, or whatever else they might need. We don’t see much of that in Fifty Shades, which elides both the complicated setup and negotiation before scenes and the care required afterwards.

At Slate, Amanda Hess reviews Fifty Shades and describes the film as very much self-aware, writing: “[T]he obvious subtext is that our heroine has fallen down the rabbit hole of the cultural phenomenon of Fifty Shades itself.” This is, perhaps, the one lesson that viewers can take away from the film when they flock to see it this weekend, which they most definitely will. While EL James may have been an earnest fanfic author and self-confessed “not great” writer, the film’s producers have taken the world she created and created a wry, caustic sendup to the culture her books created. We’re not supposed to view the BDSM in the film seriously, and that’s a good thing.