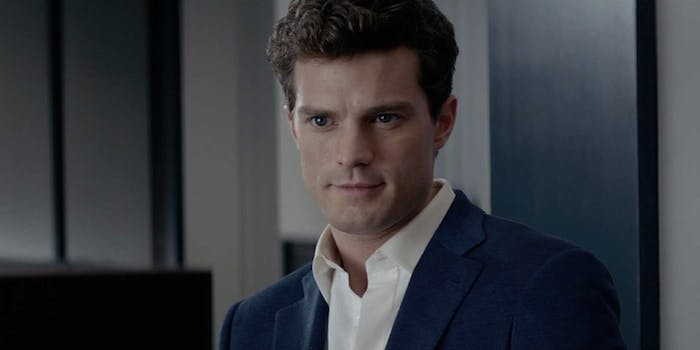 If I had any sense, I would have been picketing 'Fifty Shades of Grey.'

Last week, I was on my way into an 8:30pm screening of Fifty Shades of Grey, the film based off E.L. James‘s bizarrely popular novel, when a woman shoved a flier in my hand, claiming that the movie promoted violence against women. While this has long been a subject of Internet critiques of the film for some time, with feminist and BDSM critics taking issue with James’s depiction of kink, it’s the psychology behind Fifty Shades that deserves a closer look. For a movie that’s supposed to be about a woman’s journey toward consensual kink, Fifty Shades of Grey looks a lot like emotional abuse.

Fifty Shades of Grey, no question, romanticizes emotional and mental abuse. Are we really going to support this??

Fifty Shades of Grey is proof that heterosexual abuse is more widely accepted in film than queer romance and that's pretty damn frightening.

The fact that the media are so obsessed with Fifty Shades of Grey just shows how blind they are to the natures of abuse. And that scares me.

In E.L. James’s novels, Christian Grey is presented as the ultimate alpha male. He’s a wealthy and attractive stack of abdominal muscles who is so confident and sexually experienced that he can give Anastasia Steele, James’s Harlequin-lite heroine, an orgasm with nary a word from her. He just knows.

While my colleague, EJ Dickson, argued that this is because the novel is marketed as a fantasy about “a young, sexually inexperienced naif, learning the ropes from an older, more dominant male about their bodies and their desires,” Christian’s relationship with control plays out very differently on the big screen. Modeled off Edward Cullen, Grey is more of a well-groomed serial killer, a Ted Bundy with a Visa Black Card. (The film, which is surprisingly self-aware, even jokes about this, when Anastasia drunkenly wonders why Grey is expressing interest in her.)

If you think this is hyperbole, we’re talking about a character who continually stalks his female object of desire throughout the film. When Anastasia Steele visits her mother in Savannah, Ga., Christian casually strolls into their lunch, as if taking a plane all the way from Seattle constitutes no big deal. He also tracks her cellphone, and when she (jokingly) attempts to end things, he shows up in her apartment, wineglass in hand, to interrogate her about why she would do such a thing. To keep her from leaving, Christian continues to buy her gifts she doesn’t exactly want but feels guilty about giving back: a stack of Thomas Hardy novels, a refurbished laptop, and a brand new car.

Were this your best friend, you would advise her to get a restraining order, but in Hollywood, it’s a franchise starter that broke records in its first weekend of release.

Very little in Fifty Shades of Grey would follow anyone’s model of enthusiastic consent, where two parties willingly enjoy a sexual act because it meets both of their desires. Ana “loves him” (for whatever reason) and wants a boyfriend, and Christian wants to dominate her and control her diet.

In the recent Jennifer Lopez vehicle The Boy Next Door, Lopez stars as Claire Peterson, an English teacher struggling to reconcile with her cheating ex-husband (played by John Corbett, Carrie’s one-time beau on Sex and the City). Meanwhile, wouldn’t you know it, a hunky piece of near-jailbait (Ryan Guzman) moves next door, a 20-year-old high school student with a taste for Claire’s cookies. (Literally.) He bribes her affections with a first-edition copy of The Odyssey (one of the film’s many bits of laughable nonsense) and invites her over one evening, forcing himself on her. She’s clearly turned on by him, but she’s conflicted and insists this can’t happen. Claire tells him no a number of times, and he ignores her. She eventually gives in, but if it’s consensual in any way, it’s far less than enthusiastic.

Despite the fact that Claire was drunk and clearly being taken advantage of, The Boy Next Door continues to present the encounter as her fault. Claire routinely insists, “I’m the adult; I should have been thinking clearly!” While it’s true that Claire’s profession holds her to a higher standard of responsibility in terms of conduct, the statement looks suspiciously victim-blaming in the context of sexual assault. Because the movie is directed by the ever-subtle Rob Cohen, the mastermind behind The Fast and the Furious, xXx, and The Skulls, The Boy Next Door serves a second helping of attempted rape later, when Guzman’s Noah corners her in the bathroom and claims, “It’s your word against mine.”

What kind of sexual fantasy does this scenario present? At best, The Boy Next Door illustrates that a woman’s ultimate, most forbidden desire is fling with a charming cad who refuses to take no for an answer, for which she will be routinely punished.

In addition to echoing the dynamic of Fifty Shades, this sounds suspiciously close to the plotline of Tyler Perry’s Temptation, a film where softcore pleasure cloaks a message of Old Testament morality, regressive gender politics, and HIV-shaming. Perry’s 13th feature film stars Friday Night Lights’ Jurnee Smollett-Bell as Judith, a professional matchmaker with a marriage that’s atrophying from boredom. Her husband forgets her birthday and insists on vanilla sex, but she doesn’t know what she’s missing until a handsome billionaire client pursues her.

Harley, the film’s rich guy du jour, is like a black Christian Grey: He focuses on wooing Judith with an intense singularity, extolling the virtues of animalistic sex. Harley routinely reminds her of what life could be like if she were his, offering visions of beautiful dresses, expensive Champagne, and trips to New Orleans in his personal jet.

Sounds great, right? The issue is that Judith is married and insists on being faithful to her husband, no matter how tempting Harley is. (In one of the movie’s more unintentionally humorous moments, Bell regularly pants at him with her mouth open.) Despite Judith’s wishes, Harley forces her to submit to him during a ride on his aforementioned private plane. By my count, Judith told him to stop more than 10 times, while fighting him. He does not relent, telling her: “You can say you resisted.”

According to Mic’s Julia Birnbaum, “scenes like this are incredibly dangerous for everyone, especially [for] young men because they lead them to believe that a woman’s ‘no’ is simply part of the whole process of flirting or seduction, when in fact a ‘no’ means no and the interaction should stop there.” The movie itself, however, doesn’t treat the encounter as a rape scene—because, don’t worry, she wanted it.

Although Judith rebuffs him after he drops her off at home, two scenes later, she’s anger-dialing him to ask why he hasn’t called and skipping off to his house to enjoy wine and assorted fruit. On this note, Jezebel’s Lindy West reminded us, “This idea—that men know what women really want, that resistance can be fucked out of us (or consent fucked into us)—is deeply not OK. It’s not OK to telegraph this to young men or young women or victims of sexual violence or potential perpetrators of sexual violence or lawmakers or anyone.”

If Vox’s Amanda Taub argues that Fifty Shades is a “fantasy of female laziness,” Temptation is a fantasy of female submission, as well as a cautionary tale about its consequences. In a telenovela third-act twist, Harley has HIV, which he transmits to Judith. The movie ends with a sad, AIDS-stricken Judith limping off to church to be with her mother, a Bible-thumping Southern preacher with wild, snake-handling eyes, who warned her about the pleasures of wealth and excess. During one memorable scene, she quotes scripture at Judith: “It is easier for a camel to pass through the eye of a needle, than for a rich man to enter into the kingdom of heaven.” Thus, her mother acts as the film’s unlikely moral compass, explaining that when Judith doesn’t follow God’s word, she’s basically asking for it.

For all the shades of grey modern Hollywood promises, it seems we’re still only able to see sex in black and white.