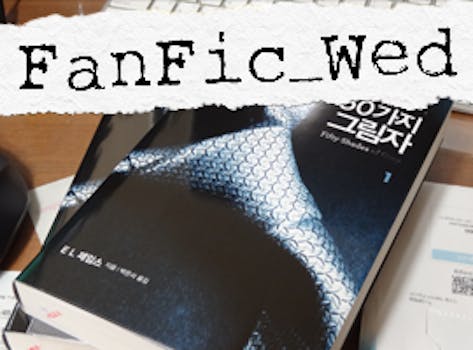 It may seem paradoxical to make the claim that a fic written by a “fan” can often serve as a far more scathing critique of a work than any review of that work. But reader response isn’t always wholeheartedly enthusiastic, especially when fans are so attuned to reading things critically. Moreover, there’s something about Yuletide, an assigned writing challenge, that brings out a need to talk back to works you might ignore the rest of the year. One of my favorite Yuletide fics, “The Journey West” by Oyce, is a brief and stellar example of how fanfiction can offer up a searing critique of a work by reinjecting what has been left out of it, in this case putting Asian-American immigrant voices back into Neil Gaiman’s American Gods.

The fic I’m reccing today is similar in spirit: it, too, makes visible what it argues is a vital missing piece of E.L. James’ bestselling novel. Only in this case it’s not an erased culture; it’s Ana Steele’s entire personality.

In Fifty Shades of Grey, inexperienced virgin Ana Steele meets powerful, hot billionaire Christian Grey, and they proceed to have all kinds of pseudo-BDSM sex for three novels. Despite how frank what they’re doing is, the novel still has a distinctly prudish tone. At one point, they exchange “racy” emails that involve Grey telling Ana that he wants to spank her “behind”; at many more, Ana’s lust gets articulated as, “Oh, my goodness.” And aiding and abetting the charade of innocence is the narrative’s frequent reliance on Ana’s “subconscious” and “inner goddess.”  Like so:

And from a very tiny, underused part of my brain – probably located at the base of my medulla oblongata where my subconscious dwells – comes the thought: he’s here to see you. No way! I dismiss it immediately. Why would this beautiful, powerful, urbane man want to see me? The idea is preposterous, and I kick it out of my head.

I had no idea giving pleasure could be such a turn-on, watching him writhe subtly with carnal longing. My inner goddess is doing the merengue with some salsa moves.

Though Ana quickly becomes experienced in the ways of lovemaking, possibly because that’s all she does for the next three novels, she deflects her sexual empowerment to her “subconscious” and her sexual desire to the constantly gyrating “inner goddess.”

In “Three Shades of Steele,” the author takes the term “shade” to mean the classic sense of a spirit that haunts a human. Through some magic involving a jinn and Ana’s mom wishing she’d stop existing in a sex-infused vacuum, Ana wakes up one day to discover that both her subconscious and her inner goddess have morphed into real, living women. The results are hilarious, creepy, and not a little sad:

Liz sighed and spoke to her in a very slow, patient tone. “You were one person; we were part of you, though we had separate personalities. I’m no expert on Dissociative Identity Disorder, but you seemed to be dancing, if you’ll pardon the expression, close to the edge. That’s probably why Mom wished what she did.

“But now…well, I got the brains and the common sense. And she”—Liz jerked her thumb in Kitti’s direction—”got the uncontrollable sex drive.” Liz gazed at her seriously. “What did you get, Ana?”

Apart from the superficial jokes this conceit raises about the book’s shallow characterizations and awkward writing (“I kind of sucked at being a subconscious, given that you were conscious of me”), there’s a primal scream of feminist rage tucked away at the corners of this fic, as it unleashes page after page of criticism about both the way Fifty Shades handles issues of consent and the Stockholm syndrome it gives to its main character. As Ana earnestly tries to figure out what happened to her personality after she met Christian Grey, she realizes exactly how much she’s lost:

These…these former pieces of her were more whole than she was, which made Liz’s merciless intelligence and Kitti’s unashamed sexuality nearly intolerable. The same words kept slamming into her brain like a sledgehammer. That was me once. Or that could have been me. And I gave it all up. I threw every particle of myself away.

As hilarious as it is that the fic suddenly drops a constantly gyrating inner goddess named Kitty upon us, and a suave, literate computer nerd subconscious that we never actually meet in the book, what happens to Ana here isn’t funny at all: Women who are taught to mold their bodies to please men often mold their personalities, too; and the overwhelming popularity of Fifty Shades proves that Ana’s personality wash is an escapist fantasy for many readers.

When Ana’s subsconscious, Liz, recalls this in “Three Shades,” she also recalls Ana being terrified, confused, and frightened of what Grey might do to her. “To Liz, it reeked of insincerity and manipulation. He only flatters her when he’s afraid that he won’t get his own way.” Set during the point at the novel in which Ana has briefly separated from Christian and visited her family in Georgia, the story uses her two new sisters and the stripping away of her personality as a wake-up call that ultimately lifts the veil from her eyes about the nature of her relationship with Christian. Here’s a scene from the novel which gets reframed in “Three Shades”:

I have neglected to mention Christian’s stalker tendencies to my mom.

I see him. My heart leaps, beginning a juddering thumping beat as he makes his way toward us. He’s really here – for me. My inner goddess leaps up cheering from her chaise longue. Moving smoothly through the crowd, his hair glints burnished copper and red under the recessed halogens. His bright gray eyes are shining with – anger? Tension? His mouth is set in a grim line, jaw tense. Oh holy shit… no. I am so mad at him right now, and here he is. How can I be angry with him in front of my mother?

Christian favored her mother with a smile that Ana had previously thought was of heartbreaking beauty. Judging by the reaction of Kitti and—oh, no, Mom, not you, too!—it still was. She just having trouble connecting this smiling man to the one who’d been sending her furious and frequently threatening emails for the past two days. There was no reason for him to be smiling.

Later, she attempts to reason with Christian about his expectations:

She swallowed several times and then went on. “It never stops, Christian. And since you getting angry generally means that you hit me or—or use sex as a weapon or both, I’m scared most of the time. I feel like I’m walking through a minefield. I never know what I’m going to say or do that will set you off. “

“All you have to do is obey me. That’s all I ask. That’s all I want.” He sounded both baffled and sad, as if she was going out of her way to make life unpleasant for him.

“Three Shades” attempts to write a different future for Ana, one in which Christian’s manipulations and violent tendencies are embodied as literally monstrous, while her female friends and family are painted as the empowering forces that can save her. While it may not delight avidly uncritical fans of the book, judging from the comments left on the fic so far, it’s proving balm to those readers who were less enthusiastic about, oh, everything in it.