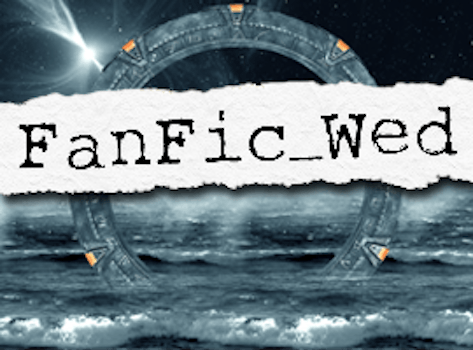 Slash refers to the incredibly large and ever-growing portion of female-dominated online fandom where women explore primarily queer male relationships through fanfiction and other fanwork.

One recurring criticism of slash as a literary movement is often lodged by queer men who feel that women are appropriating and fetishizing their experiences. But in fact, slash fanwork often does just the opposite, exploring serious sociopolitical themes and queer identity.

Stargate: Atlantis, one of the silliest shows ever to spawn a large online fandom, ironically has also inspired a disproportionate amount of extremely smart and iconic slash fics, most of it for the popular SGA slash pairing of John Sheppard and Rodney McKay. Today on Fic Rec Wednesday, we look at one of the classic fics of SGA fandom, and discuss why, for all its problematic elements, and the way it is frequently seen as a member of the “Any Two Guys” brand of fetishizing slash fiction, “McShep” was a major fandom milestone because of the frequency with which it united a deconstruction of its source canon and U.S. politics with the universal fannish desire to watch two white dudes falling in love.

It was almost a deal breaker. But he was young, and he wanted the job—couldn’t ignore that it would offer him more opportunities than anything else, more opportunities by far. Besides, while they weren’t willing to bend on that one particular point, they were quite happy to offer him a variety of other bonuses and enticements, because they wanted him, too—had made that very clear—and were willing to go to extra lengths to secure the full cooperation of any Canadian citizen willing to sign a contract with the United States government. Especially one as brilliant as him.

So Rodney signed the paper, and Rodney submitted to the procedure—which was, as they had assured him, painless. And when he saw the full extent of the facilities at Area 51, he was glad that he hadn’t let such a trivial thing keep him from this. Sure, the policy was idiotic and backward, but it wasn’t like it had anything to do with him.

This is the way Trinityofone’s brilliant 2006 fanfic, “DADT, Damyata, Dayadhvam,” begins. At its heart, “DADT” is classic sci-fi: a “Harrison Bergeron” for the closeted U.S. military in which members of the Atlantis expedition must agree to an implant which shocks them whenever they experience homosexual thoughts or urges. While this device could be cheesy and melodramatic, Trinityofone’s clean, perfectly deadpan writing style transforms it into a powerful metaphor for the actual imprisoning effects of the real DADT. At its best, “DADT” is both a look at how damaging institutionalized homophobia can be and a scathing revenge fantasy against the U.S. government.

The title carries a stack of meanings. Trinityofone references a section of The Waste Land called “The Thunder” in which T.S. Eliot references a famous parable from the Upanishads. In the parable, three virtues are given, in order, as, “Damyata, Datta, Dayadhvam,” meaning, “Submit, be charitable (give), and be merciful (sympathize).”

Eliot swaps the word order of the virtues for his poem, making it, “Datta, Damyata, and Dyadhvam.” For “Datta,” Eliot asks: “what have we given?” When Trinityofone converts this word to “DADT” in her fic, “what have we given?” becomes a rhetorical question directed at the victims of the military ban—and, perhaps, at each of us as well.

Stargate: Atlantis is a show about members of the U.S. military struggling to maintain order and peace in a galaxy where they are, essentially, invaders and colonists. The political ramifications of their presence on alien planets, as well as the reality of military politics back on earth, were largely ignored on the show, which led many fanfic writers to take those explorations into their own hands. One result of this was the prevalence of stories using McKay/Sheppard and other pairings to explore Don’t Ask, Don’t Tell as it related to the new, alien society of Atlantis, far away from U.S. social pressure.

Trinityofone explores DADT from an unusual perspective: the electric shock treatment actually works to help Rodney McKay, a 40-something irascible scientist who considers himself straight, begin to realize that he’s attracted to other men:

It was on Atlantis that he felt the effects of DADT for the first time, too. Or rather, it was off-world. M3D-238: a hospitable planet, a very, very hospitable planet. They had great wine and, shockingly, semi-intelligent people. Rodney stayed up long after the others had gone to bed, talking and drinking with Dian. Eventually, she, too, departed for her sleeping chamber, and well, that could have gone better, but mostly, Rodney was too drunk to care. He stumbled toward his room.

The lights were out and he didn’t bother turning them on, just started yanking off his shoes and pants, then struggling to remove his shirt. It got caught on his ears twice, but finally he managed to pry it off. He dropped it on the ground, on top of his boots. Funny, he thought he had been wearing sneakers.

Slipping into bed—soft, cool sheets, firm mattress—he rolled over onto his side to pull the other pillow to his chest. Instead his fingers connected with something solid and warm and—

Like a lightning bolt, stabbing into his brain; a hot, metal sting working its way down his spinal cord. He fell back convulsing, mouth open, too stunned to scream.

When he could open his eyes again, the lights were on and he had never felt more sober in his entire life.

Trinityofone tacitly shows the effect of “straight privilege” upon Rodney by portraying him as a man who is mostly uninterested in this issue until the electric shock starts to apply to him, too. Overnight his indifference vanishes, to be replaced with anger. Written six years before the actual repeal of Don’t Ask, Don’t Tell, the anger and bitterness of “DADT” finds a perfect voice in McKay, who is a misanthrope on a good day. Using Rodney’s anger as a starting point, Trinityofone sends her characters on an epic quest to fix the U.S. military’s injustice at any cost.

“It is—thankfully! joyfully!—in obvious ways a less relevant story now than when it was written,” Trinityofone tells the Daily Dot. “It’s interesting to think that if SGA were a current fandom, there’d be no DADT fics,” she says, referring to the huge impact the trope made on that fandom. “It makes it seem like we really have progressed in the last seven years.”

There’s something deeply personal in this story of the impersonal becoming personal—a dystopia felled by the power of love—and something ultimately unforgettable about the way John and Rodney create their new world order, and their new word order: be merciful, (refuse to) submit, and give back as good as you get.