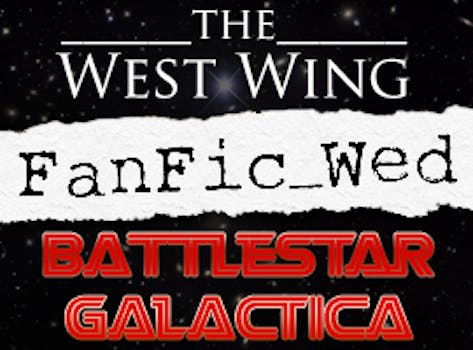 Continuing our look at fics that are interesting, complex, and unique, today we take a look one written as a part of a challenge. The Daily Dot recently reported on the phenomenon of fic exchanges and challenges in fandom. As with many writing exercises, the point is to be as creative as you can under specific restraints—and the result is often remarkably inventive, as with today’s fic, “Habeas Corpus,” by projectcyborg.

“Habeas Corpus” was inspired by a challenge within the femslash corner of the West Wing fandom, called Wing Swing. The goal was to mix random female characters, including from other fandoms, with a female character from the West Wing. In other words, a group of fans who enjoyed writing queer relationships between women from the show decided to play mix and match.

projectcyborg chose cool, powerful Laura Roslin from the relaunched Battlestar Galactica, making her fic what’s called a “crossover”: where elements from two universes overlap. The West Wing character she was randomly selected to pair up with? Glenn Close’s turn as Supreme Court Justice Evelyn Lang on the 2004 episode, “The Supremes.”

One of the best things about a well-done crossover is watching how the interaction of such different plots, characters, and settings can bring about fascinating results and raise interesting new issues. This fic, which was written in 2006, e.g., before the actual ending of Battlestar Galactica, has the beleaguered battleship finding its way to a modern-day earth with several prisoners on board, including Cylons, a race of cyborg humanoids at war with humans.

In this instance, the combination of alien race + potential killer alien robots + the White House = a wonderfully complex look at political theory and adventure. The legal repercussions of letting a giant spaceship with thousands of civilians land on U.S. territory alone is a rich and fascinating idea. In her role as President, Laura Roslin has to position herself carefully—and occasionally act ruthlessly—in order to protect her people.  Who better to deal with the impact of universal territorial disputes, extraterrestrial immigration rights, and conflicting sovereignties than the head of the Supreme Court?

Seeing how these two strong women come together in “Habeas Corpus” is mesmerizing. But what makes it even more intriguing are the meta-textual references to fictional news articles and Supreme Court opinions projectcyborg has so deftly woven in: 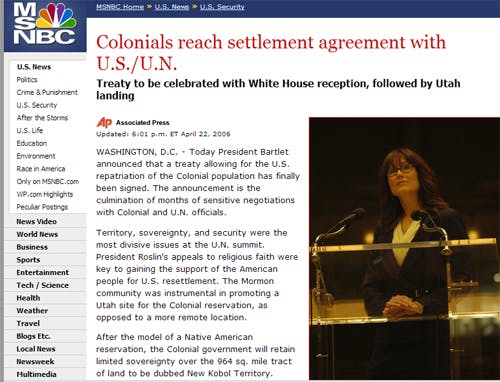 The grounding of the fic in these contemporary, real life elements not only heightens the realism of the extraordinary situation the characters find themselves in, but brings home the political pressures these two women are under. This has the added advantage of making it increasingly hot when their chemistry sparks over questions of humanitarian doctrines:

“What’s a person? I mean, legally speaking?” Roslin’s voice thrums with an undercurrent of ferocity. It takes Evie a moment to figure out why.

“Oh God,” Evie says. Her head spins, and she grips the back of a chair. “The leak, the rumor that there are human-type Cylons, that you have Cylon detainees—it’s true, isn’t it?”

Roslin’s eyes go wide. She clears her throat, and looks down. Evie is holding her champagne in her left hand. “Are you married?” Roslin asks. The cultural similarities are truly uncanny.

“Separated.” Evie rubs her wedding ring with her thumb. “It makes life easier if I keep wearing it. You know I can’t answer your question. There’s no precedent for this.”

“And you know I can’t answer yours.” Roslin meets Evie’s eyes again. Her look is fiery. “There is precedent. There are procedures for the indefinite military detention of enemy combatants who pose an imminent threat. There’s Roe versus Wade.”

Evie shakes her head, a little awestruck. “Roe doesn’t define what a person is.”

“Roe suggests that there’s a point, if an indeterminate one, before which a proto-human entity is not understood to have rights — ‘the word “person,” as used in the Fourteenth Amendment, does not include the unborn… the law has been reluctant to endorse any theory that life, as we recognize it, begins before live birth or to accord legal rights to the unborn.'” They stare at each other. “Have I mentioned that you look stunning in that dress?” Roslin says. Evie is swathed in strapless bronze taffeta. She blushes despite herself. Roslin grasps Evie’s wrist, her thumb and fingers skewering Evie between two points of heat.

In this fic, both women use sex as a weapon—a way in to finding out what they need to know about the other’s agenda and political aim. The truly engrossing thing is that this doesn’t make the sex any less intimate, or the communication between them any less sharp:

Roslin grabs Evie’s ass and tucks her tighter between her legs, pushing her center against Evie’s thigh. Evie can feel the heat there, right through her clothes. As Evie is tugging the tails of Roslin’s shirt out of her pants, Roslin says, breathless, “I banned abortion.”

While this fic manages to incorporate plenty of hotness, it also manages to pack a heavy political punch, in keeping with the intense contrast between the political untamed landscape of the Galactica (where all bets are off), and the rosily liberal optimism of the West Wing’s D.C.

What’s even more refreshing is how frankly the fic portrays two older, sexually and professionally confident women dealing with uncharted political waters. Though the romantic relationship between them is a selling point, the political chemistry here is the real pivotal tension of this fic. Here, it is their respective roles as leaders of their nations that cause the most delicious friction of all.

In terms of the portrayal of female characters, we can count that as a frakking win.