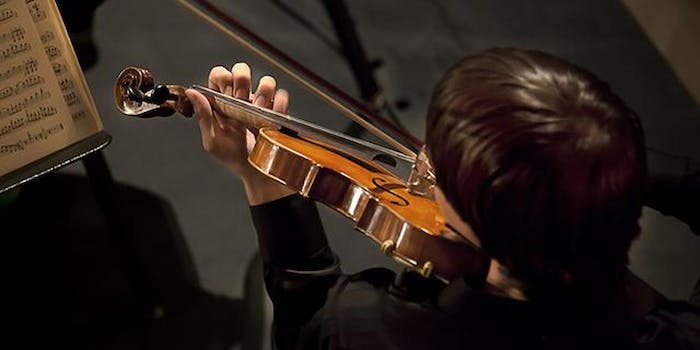 Three banners were dropped from the hall balcony as the 50 or so demonstrators sang. On one was Brown’s likeness above the year of his birth and death (1996-2014). Another banner encouraged patrons to “join the movement.” The activists also chanted, “Black lives matter.”

The unexpected performance was apparently titled Requiem for Mike Brown, according to heart-shaped notes left behind, a play on the interrupted work.

The group, said to have “beautiful voices” by one St. Louis Post-Dispatch reporter present, departed peacefully and without further incident after roughly a minute and a half. According to a spokesperson for the St. Louis Symphony, the Mike Brown supporters had all purchased tickets for the event.

Before clearing the hall, the activists were applauded by individuals in the audience, and reportedly, some members of the symphony.

Shot and killed by Ferguson police officer Darren Wilson two months ago this Thursday, Brown’s death continues to spark outrage among members of the mostly black Ferguson community—many of whom spoke out after Brown was killed against their treatment at the hands of a predominantly white police force, only to be met with tear gas and rubber bullets.

Next weekend, thousands of people are expected to converge on Ferguson and rally for three days for victims of police brutality. Among other demands, the protesters are asking the federal government to “implement critical reforms to end abusive, militarized, and biased policing targeting black and brown communities.”

Organizers in Ferguson calling for “A Weekend of Resistance” Oct 10-13 https://t.co/HWEiXdu3nw

“Ferguson October,” according to the event’s official website, will involve a march on Ferguson prosecutor Bob McCulloch’s office on Friday; marches across the nation and in St. Louis on Saturday; and on Sunday, people will gather at places of worship to commemorate the lives of people killed by police violence.

A St. Louis County judge recently granted a 60-day extension to the grand jury that will ultimately decide whether or not to indict Officer Wilson. The now have until Jan. 7 to come to a decision.